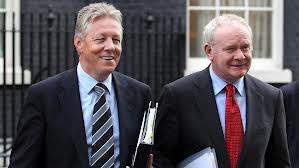 It’s a clenched-teeth laugh, the way politicians try to dress up self-interest as selflessness/ sacrifice in the party’s/country’s interests/ a decision taken with a considerable degree of reluctance.
Take David Milliband. He’s quitting British politics and going to the US.  His wife is American, both his children were born in America. But nice young(ish) David still makes it sound as though he’s clearing off for the benefit of his brother and the Labour Party.  It seems he ‘passionately’ wanted Labour to return to power and that he’s ‘proud’ of his brother Ed’s leadership. (David’s wife, on the other hand, is mooted to have described Ed winning the Labour leadership as an act of ‘unforgivable treachery’.)  While David’s been kicking his heels on the back benches of the House of Commons, he’s managed to make near to £1million (on top of his MP’s salary) on the speech-giving circuit  (£20,000 a pop, apparently). But if you think that’s nice money, get this.  In the country he’s heading for, CEOs in big companies earn an average of nearly $13 million. You don’t need to be a mathematical whizz-kid to spot the difference. David’s on record as saying he felt he could be “most helpful to the [Labour] Party on the front line, in South Shields and around the country”. It’d be reasonable to assume that pulling  an annual $13 million salary would be even more helpful to the David Milliband household.
Meanwhile, Peter Robinson and Martin McGuinness were in Downing Street, trying to persuade David Cameron to let them lower the the corporation tax here. The south of Ireland has a 12 1/2% rate, as you probably know, while the north here is saddled with the British rate of  24%. Again, you don’t need to be a mathematical genius to see which is more attractive to investors. Cameron didn’t say yes – he said I’ll tell you after the Scottish referendum, which is well over a year away. Did he say that because he’s concerned for our economy here in the north? Uh-uh. He did it, not surprisingly, in Britain’s interests – or more specifically in England’s interests. Peter and Martin were disappointed, it’s said. They shouldn’t be. Yes, they’re right that a corporation tax of 12 1/2% , like that enjoyed by the south would have been beneficial here in the north. But surely they weren’t  surprised that Cameron acted with an eye to England/Britain’s welfare rather than that of the north. Self-interest: that’s what David Milliband went for, that’s what David Cameron went for, that’s how the political world works.
Which is another good reason for us running our own affairs.

View all posts by Jude Collins →
Immigrants – what a shower, eh?
Of starfish, masochism and a final call

13 Responses to I’m doing this for you. Honestly.