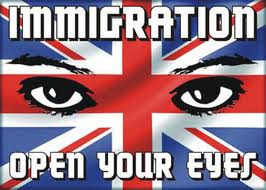 I’ve just come off the Nolan show on BBC Raidio Uladh/Radio Ulster and I’m still hopping mad. Not because of the show itself but because of the topic. It was David Cameron’s immigration speech yesterday.
David McNarry, who quit the UUP and, in search of a home, found UKIP, was also on, doing his best to make a case for (i) a lock-down on immigration into Britain; (ii) an exit from the EU by Britain. Both daft proposals, but UKIP have got the wind up Cameron, especially since the Eastleigh by-election, when UKIP took a massive 14% bite out of the vote.
Cameron in response used his tough-on-immigrants speech – not unlike Enoch Powell’s infamous rivers-of-blood speech in 1968.   The impression left by Cameron’s speech was that immigrants were entering the UK and sucking on its life-blood through abuse of its social services. What’s more he, Cameron,  was the man who would put a stop to it.
As is often the case with the British prime minister, pure waffle. The facts from his own government departments contradict him. Contrary to Cameron and popular mythology, immigrants to Britain over the past ten years are not welfare scroungers. Of the two million immigrants , a total of some 13,000 claimed Job Seekers’s Allowance – about half the rate of the indigenous population. Contrary to Cameron and popular mythology, immigrants are not a burden on a sorely-stretched NHS.  In fact, most immigrants are healthy young people who have little reason to use the NHS. All of 0.06% of the NHS budget goes on immigrants.
Their contribution to the British economy, meanwhile, is considerable. The people who come to that country are in the vast majority of cases intent on securing a job. When they do, they pay taxes, they help revive the economy, they add energy and hard-work to the drive to bring Britain out of recession. And as the British population continues to age, they add their number as young people to support the increasing number of old people.
On the Nolan Show, David McNarry said he hoped I wasn’t associating him or UKIP with “rivers of blood or anything like that”. I didn’t get a chance to answer that so let me do so now. I am.  Powell’s speech and Cameron’s speech and the thrust of UKIP policy is anti-immigration. That’s not just misguided. It’s dangerous.

View all posts by Jude Collins →
Irony? No thanks, we’re English
I’m doing this for you. Honestly.

7 Responses to Immigrants – what a shower, eh?