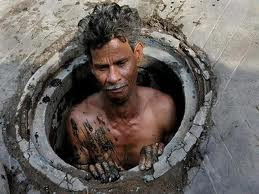 Everything’s relative. If I think I’m overweight, I look at Stephen Nolan and realise I don’t have a problem. If I suspect I’m arrogant, I listen to Sammy Wilson for five seconds and I realise I’m quite meek and mild. And when we think we’re having a hard time getting by during this recession, we should have a look at India.
Some one-third of the world’s poor people live in India. We tend to think of Africa when we talk about poverty: the fact is,  the poverty in eight Indian states exceeds that of the poorest 26 African countries.
India’s also a country where class/caste divisions flourish, with malignant results. If you were living as one of what are called the Scheduled Tribes, you’d find that 81% of your group lived in poverty. More than 1.5 million Indian children suffer from malnutrition and 43% of children under five are underweight. It’s even worse than sub-Saharan Africa – in India, 828 million people live below the poverty line. Compared to them, the poorest of us live in luxury. And don’t forget –  India is among the top three economies in the world. It doesn’t take an Einstein to work out that wealth in India is very badly distributed.
Which is why I’ve done something very foolhardy: I’ve agreed to run the Omagh Half-Marathon on Saturday 30 March for Trocaire. At my age, you train for this kind of thing very, very carefully, and you feel it as the mileage grows and grows.  So what I’m saying is, if you’ll agree to sponsor me – and I do hope you will – then the pain you’ll feel, relative to what I’ll feel and am already feeling, is nothing. And what to you is a modest contribution could and will make a massive difference to the lives of people who are feeling the lash of real poverty every day.
Of course there are all sorts of arguments for not sponsoring. If India’s a thriving economy, let the Indians look after the Indians. If I give money to Trocaire, it’ll go to sustaining the jobs of those who work in Trocaire or to corrupt Indian officials when the funds arrive. There are all sorts of excuses for not shelling out a few quid but in the end, we know in our hearts whether we’re being reasonable or just plain tight.
So go on – open your wallet and your heart. It’ll take literally a couple of minutes and you’ll have the satisfaction of knowing you’ve done at least one truly human thing for those whom the Western world and the Indian elite treat as slum dogs.
If you like me, click the link and help out. If you detest me, click the link and think of the exquisite pain you’re inflicting on me. But one way or another, don’t close your heart and your mind and sail on to a new site. People’s lives depend on it.  I’m aiming for a total of £1000. Your aim, as the old lavatory joke used to say, can help.
Here’s the link. Just do it.
www.trocaire.org/sponsor-me/judejcollins/omagh-half-marathon