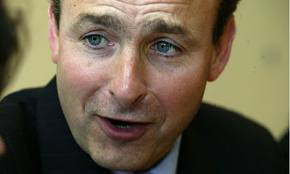 There’s something vaguely risible about the notion of the Fianna Fail leader coming north to tell us us how badly we’re doing. He’s glad we’ve settled down and stopped killing each other but he’s disappointed at the lack of progress in the last fifteen years. He says there should be more cooperation. And he talks of “the risks for peace” of the SDLP “with the Dublin government” and how brave all involved were.
He’s right – or half-right, anyway. No, make that one-quarter right.  The SDLP did take political risks for peace.  But while they faced political risks, people like Gerry Adams and Martin McGuinness faced life-threatening risks. There was – and maybe in some quarters still is – a risk that erstwhile comrades would try to kill them. Yet they pushed on and transformed politics in this sad little neck of the woods. That’s what I call taking risks.
Micheal kind of forgot that. Just as he forgot to mention that successive Fianna Fail governments were worse than useless in their support of the nationalist people of the north. You could say it started with Jack Lynch’s famous ‘We’ll not stand idly by” speech in 1969, but it goes back beyond that. The south abandoned northern nationalists to their fate at partition, and the rest was empty rhetoric. Sure, Bertie Ahern put in a prominent display in the final days before the Good Friday Agreement, a bit like Charlie Haughey put in a prominent display the time that Stephen Roche won the Tour de France.
And it’s not as if Fianna Fail corruption and incompetence stopped there. They ignored the north and they financially destroyed the south. With, of course, some help from bankers and developers. We must give credit where credit is due. But let no one say that Fianna Fail were behind the door in bringing the twenty-six counties to its knees.
And now Micheal, its leader, is crossing the border to give us our school report and really, you know, he’s disappointed. “Could do better – much better” is the essence of his judgement.
I’m not sure how healthy Micheal is but one part of his anatomy is truly sturdy – his neck. Brass, in fact.

View all posts by Jude Collins →
Three things about the lolly we get from London
Nigel Lutton, his father and his Uncle Joey

6 Responses to Micheal gives us our report card