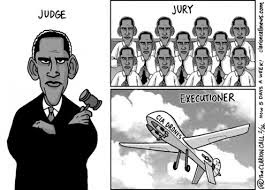 I sometimes have to struggle to stop myself going with the more-pleasing vision of things,  rather than accept the sadly-more-sour reality. An example? I found myself moved when Barack Obama made his victory speech after being elected president for the first time. That huge crowd, those Afro-Americans in tears, the great hope of a bright new day after the bumbling and bellicose Bush.  I was glad, too, to see him win out over Mitt Plastic-man Romney. In his second and final term, I thought, Obama’ll come through. He’ll live up to that bit about talking to one’s enemies rather than resorting to force against them.
And today I feel myself being nudged towards the more-pleasing vision. The American president tells us  “The people of Northern Ireland and their leaders have travelled a great distance over the past fifteen years. Step by step, they have traded bullets for ballots, destruction and division for dialogue and institutions, and pointed the way toward a shared future for all…On behalf of the American people, I salute the people and leaders of Northern Ireland and the model they have given to others struggling toward peace and reconciliation around the world.”
Gives you a warm glow, doesn’t it? The man who overcame all the odds to become American President, supporting us in our peace-and-reconciliation efforts. A warm glow providing, that is,  you don’t look at Obama’s drone-work in Pakistan. No, not home-work, drone-work.  There, well over 3,000 people have been killed during his time in office. The claim is that the drone-attacks are taking out  (aka killing) the bad guys – al qaeda activists. There’s truth in this. There’s also the awkward fact that if a drone demolishes a house containing an al qaeda activist and at the same time demolishes a house next door containing, say,  six adult males who are leading peaceful lives,  those six adult males are counted as al quaeda activists. This gets round the tedious notion of having to talk about drones doing “collateral damage”. Mind you, we’re still left with a lot of dead women and children but hey, nobody’s perfect.

So that’s the reality. The man who’s praising us for our drive towards peace and reconciliation, and promising his support and that of his country as we do so, is in charge of a foreign policy that kills people in their thousands, many of them innocent people, and then lies about what’s been done. This man is also ultimately responsible for Guantanamo Bay,  a torture centre which he promised he would close if elected.
I know the world of politics and power is a rough old world, but I think there’s a strong stench of hypocrisy comes with high words from a man who presides over so much continuing pain and death, much of it inflicted on innocent people. And I know T S Eliot said humankind cannot bear too much reality. But sometimes you have to grit your teeth and see the world as it is. Fifteen years ago a peace process was put together, with considerable American help.  It looks as if the Yanks were implementing a do-as-I-say-not-as-I-do policy.

View all posts by Jude Collins →
Alan Shatter, his wife and some gardaí
Running and cogitating

4 Responses to President Obama: should we listen but not see?