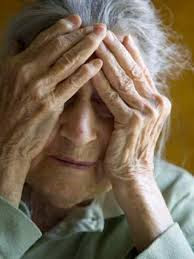 I wonder how many of the people who voted  for Francie Molloy on Thursday believe in a united Ireland? What’s that – all of them, you say? Right. And how many of them have a clear vision of what that new Ireland might look like? Mmm, you could be right. Not too many.
OK, here’s a little experiment. Close your eyes and imagine you’re in your 60s,  70s, maybe 80s. You have Alzheimer’s. You’re not sure who your loved ones are when they come to visit you. Sometimes in the middle of the night you get up and get dressed, because you think you should be going to work even though it’s 3.00 a.m. Other times you think your mother is still alive and you’d better get home quickly or she’ll be wondering what’s happened to you. And then, in the middle of all this mental confusion, a bombshell. The place where you’ve been staying, the little bit of familiarity and routine that you were clinging to – it’s all swept away. The nursing unit you’ve been living in is to be closed and you and everyone in it will be farmed out elsewhere.
What’s that? Sound like the south of Ireland, where the health system is a joke?  Uh-uh. This is the north. This is the NHS,  one of the reasons some people cite for remaining in the UK. This is a real-life, eyes-open NHS unit in Derry. The Trust there plans to shift the six remaining residents and put them into private care homes. The families are resisting because (i) their loved ones are likely to be in an agitated/bewildered state with the move; (ii) it all looks part of the increasing movement to privatize the NHS; and (iii) they don’t like the idea of putting their loved ones into the hands of those who make a business out of others’ misery.
I said at the start that not many people who are in favour of a united Ireland actually think through to the kind of state they’d like to see created. They might want to start by looking at health care on both sides of the border ( yes, both – as this case shows, the NHS in the north is being dismantled bit by bit).  In fact, now that we have devolved government, wouldn’t it be great if we were able to work towards the kind of health service that a new Ireland might offer? Maybe if we start with some ghastly examples on both sides of the border, we’ll begin to develop a picture of the kind of united Ireland we really want. It wouldn’t be the south’s system and it wouldn’t be the north’s or Britain’s. It’d be ours, and surely to God we could do it better. Maybe time to make a start?

View all posts by Jude Collins →
Robert Ballagh and Geraldine Finucane: talent and determination
Just do it.

2 Responses to Taking care in a new Ireland