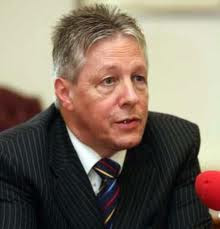 There’s nothing like listening to your First Minister waxing moral as you chew on your Rice Krispies. I had this instructive experience this morning, as Peter Robinson explained to Noel Thompson on BBC Raidio Uladh/Radio Ulster that he wasn’t bending Chief Constable Matt Baggott’s ear with that recent meeting, he was just pointing out some facts. Which when boiled down amounted to one fact:the  police service – oh, and the judicial system – were treating loyalists much more harshly than they treat republicans. For example  loyalist bail denied,  republican bail granted. Where’s the equality?
Indeed, Peter. We’re all behind you on that. We can’t have a system where one section of the public is treated differently from another. Like, Matt Baggott has played a waiting game with flag protestors who broke the law week in week out, and I think I said he came across in a TV interview with all the ferocity of a week-old lamb. But I’m willing to accept I could have been wrong. Any policy that puts Willie Frazer and Jamie Bryson  behind bars can’t be all bad.
But of course the ultimate test will come in about four months time. If Ardoyne residents or any other nationalist community decides to block the intrusion of bigots in bowler hats,  will Matt be patient and allow his plan of prosecution to come to fruition around four months later? Or will he give instructions for his men to wade in there and apply the law at the business end of a baton?

4 Responses to The importance of serving sauce equally