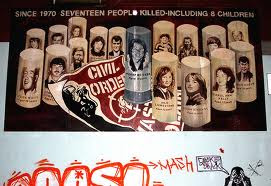 It’s probably not unique. There likely are parts of the world where, when the judge has passed sentence on the guilty party, he/she turns to the victim or a relative of the victim and asks “Any other punishment you’d like to add?” There may even be countries which sign international treaties and then ask some (although not all) of those  who’ve suffered – “Even though the terms of the treaty have been fixed and ratified years ago by both sides, would you like us to change it in some way?”
That’s essentially what has happened with Jim Allister’s bill in Stormont yesterday. Even though the terms regarding those involved in the conflict have been agreed,  that will now change so that anyone with a prison sentence longer than five years will find it difficult if not impossible to be hired as a political advisor. To give Jim Allister his credit, he’s probably thinking of the pain the victims feel and how appointment of someone as a political advisor might add to that pain. He’s less likely to be thinking with his barrister brain about the notion that democratically-determined rules will change at the behest of the victim.
But why stop at political advisors? Why not block the path of ex-prisoners towards other kinds of work?  Stop them becoming taxi-drivers (oh, right – they’ve blocked that already,  you say?),  stop them becoming teachers or accountants or dentists or doctors?  Or even politicians….Whoa, whoa. That doesn’t fit. There are a number of politicians in Stormont, from the Deputy First Minister down, who make no secret of their paramilitary involvement in the past. Shouldn’t there be a campaign to have them removed? They didn’t all serve five years and more of prison sentences but that’s probably only because they weren’t caught. They’re all Shinners anyway, so to have them removed would serve a dual purpose: cater to the pain of the victims – or at least the victims of republican violence –  and at the same time get us back much nearer the old days, when a puny Nationalist opposition squeaked and squeaked again as the unionist majority steamroller rolled over them again and again and again.
At the risk of repeating myself: victims are the last people who should be allowed decide how those found guilty should be punished. That’s because by definition they are victims and therefore would find it hard – in some cases impossible – to be dispassionate about allocating even-handed punishment. Nor should any group or individual, however much sympathy they deservedly elicit,  be allowed to arrange for changes to international treaties. In fact, for the reasons I’ve given, they should be the last people allowed to do so.
If, however,  you think they should be the first,  you’ll have to make sure all victims get to rearrange what’s been agreed, not just those with the loudest voices.  Right?

View all posts by Jude Collins →
Can I interest you in some quality Death?
Health provision: it’d make you sick

19 Responses to Victims of the Troubles: should they decide the punishment?