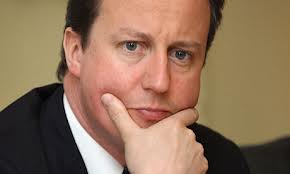 When you hear David Cameron weaseling on about football, you begin (or continue) to be worried about his reasoning abilities as a prime minister. Before ever the FA had delivered its verdict on Luis Suarez and Teethgate, Cameron was in there like a shot announcing that the normal three-match ban would definitely not be enough. When Suarez got hit for ten games, Liverpool FC not unreasonably said that Cameron’s statements before the decision were likely to have influenced those who handed Suarez ten weeks.
Oh no, Cameron said. Oh no no no no. “I made my own views clear just as a dad watching the game. I’ve got a seven-year-old who just loves watching football…Bringing up children is one of the toughest things we do but you can’t wrap them in cottonwool and hide them away from the world, they do see these real-life examples and they repeat them back to you.”
Where to start?  David old chum, when you make your views clear you do at as the Prime Minister of England. If you were just a regular dad, you wouldn’t be reported in the newspapers.  And if you can’t see that your urging of a heavier ban wouldn’t have put pressure on the FA to come up with something thumping, then you shouldn’t be running a country. As to your child watching TV – does he react to everything he sees on TV? Say in an average game, there are – what –  twenty free kicks. These are usually not for biting but for pulling people’s shirts, elbowing them in the face, kicking their shins, jumping on their foot, complaining loudly and persistently to the referee.  Does your wee lad “repeat those back” to you? As a keen soccer fan he must be watching them every week of the season. And what about movies where people get shot – you figure maybe he…No, stop me somebody, stop me. Let’s just say Cameron is one more toff climbing on the footballing bandwagon who then denies doing any such thing and presents himself as a “dad”.  I wonder how many bad habits his child picks up, just watching Dad around the house. Or even watching him on TV arguing the case for nuclear weapons.
I think I’d better go into a darkened room and lock the door behind me. I’m getting this terrible desire to seek out a prime minister and bite him.

View all posts by Jude Collins →
Micheal Martin: a far-seeing bird?
Eamon and Theresa: dancing in the dark