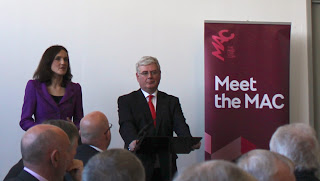 There was a meeting of the British-Irish Secretariat today.  It was held in the MAC in Belfast and it had two big political beasts (metaphorically speaking) performing: British Secretary of State Theresa Villiers and Irish Tanaiste Eamon Gilmore.  Theresa said that British-Irish relations had never been better than they are now. And thanks to the British, Irish and US  governments, terrorism had ended. Fifteen years from the Good Friday Agreement,  the big priority for the next fifteen would be to fix the economy and provide jobs.
Tanaiste Eamon said the Good Friday Agreement had “put the politics of the past in the past and left it there”.  When he was fifteen or sixteen, he said, people were still talking about the Civil War; he, on the other hand, wasn’t interested in the past – he was interested in the future.
There were then a series of questions from young people .One youngster asked what did Theresa and Eamon think was the biggest achievement of the Good Friday Agreement. Eamon said an end to the killings was its big achievement, and made reference to tit-for-tat killings.  Theresa said “I agree”.
I know I should have been cheered up by the meeting but I found depressing.  As I sat and listened to the young people’s questions and the two  politicians’ careful answers, it struck me that the whole operation was a dance of sorts. In the middle of the room was a big smelly gorilla, scratching itself and glowering, while the speakers danced round it, eyes averted.
What gorilla? The gorilla behind the Troubles, the gorilla at the heart of our differences. Partition, British Presence, Irish Unity – it has several names. Quite right, Eamon and Theresa, we all want to press on to a better future, one with jobs and economic stability and equality.  But if we’re so petrified by the possibility of sinking back into our bloody past that we can’t even tell ourselves what it was about, there’s little chance we’ll push on to a future with our eyes wide open.  And heading anywhere with half-shut eyes is hazardous.

View all posts by Jude Collins →
David Cameron – just a dad. Honest.
The Orange Order: marching to a different drum?

3 Responses to Eamon and Theresa: dancing in the dark