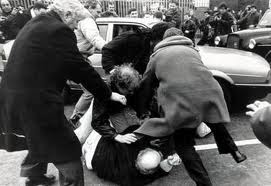 Transparency – lovely word, isn’t it? A word without jagged edges, a word that’s almost a sigh, a word that puts nothing between you and its meaning. Unfortunately there’s not a lot of it about.
Let’s take two examples – both fairly current at the moment.
On 19 March 1988, two British soldiers, Derek Wood and David Howes were beaten and then shot dead when their car was intercepted in a funeral procession in West Belfast. When the recent motion expressing sympathy for these two men was widened to sympathy for all victims of violence in the Troubles, the DUP got very upset. Despite that upset the wider motion was passed.
The question no one chose to address in the Belfast City Council debate  is  fairly obvious: what were the two soldiers doing in the middle of that West Belfast funeral? OK, perhaps City Hall the other night wasn’t the time or place for an answer to that question –  but what about over the past twenty-five years? The only answer I’ve been given is that the two men “stumbled” on the funeral – that is, they got sort of lost and by mistake drove into the middle of it. Frankly, that sounds absurd. The first thing a British soldier arriving in the north would get during the Troubles was a clear notion of where to go and not go. There have been allegations that the two men were FRU operatives on reconnaissance.  There are also allegations that even the families of the dead men have been kept in the dark regarding their role.
Given the detail which we have available on the horror of the two men’s deaths, you’d think that some detail would be available as to why they were there, what was the purpose of their presence, who sent them if they were sent.   Astonishingly, not so. I’ll be happy to be corrected but this window’s transparency looks to have been totally blacked out. Why?
The other, unrelated question no one can get answers to is “How much money does the UK Treasury give to the north each year?”  The prompt unionist answer is  £10.5 billion. Prompt but less than transparent, it seems, because it’s based on some dodgy British Treasury calculating which even they admit is flawed. For example, the British claims its expenditure on the north is just over £23 billion. But then it appears that some £5.7 billion never gets here. Over £3 billion gets spent on British forces in Afghanistan, War pensions,  Royal palaces, Royal travels – stuff like that.
Equally muddy is how much money gets sucked out of here. You’d think, since they’re receiving it, the British would know how much we pass to them annually. But if they do they’re just not telling. The Department of Finance and Personnel here estimate  we cough up  £12.7 billion each year. So if you do the sums with that, you get Britain propping up this place with under £5 billion, not the £10.5 billion usually quoted.  And even that doesn’t allow for all the corporation tax and VAT generated by the many big British firms here. The bottom line? The facts and figures about the financial advantages of being part of the Union are as muddied as a pig-stye window.
You think that these two matters are so important, the truth should be demanded and given? Me too. But it ain’t. The blinds are firmly down on both cases. I’ll let you guess why.

View all posts by Jude Collins →
A councillor, his high horse and his withered fig-leaf
Was Pearse mad?

6 Responses to How to be transparent