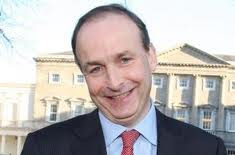 Micheal Martin reminds me of the Skibbereen Eagle. Not in appearance, more in tone and self-image.   You remember that newspaper’s famous declaration in 1914: “We give this solemn warning to Kaiser Wilhelm: The Skibbereen Eagle has its eye on you”.  Micheal is a wee bit that way too.  In his speech at Arbour Hill last Sunday, Martin announced that the British and Irish governments had taken their eyes off the North, showing “a clear and dangerous lack of commitment”.
Well, well. He’s right but sort of in the same way that I’m right when I look out my window at 9.00 am and announce that it’s daylight. When the northern state was formed, Britain passed over the running of it to unionist politicians and what followed was fifty years of discrimination and gerrymandering. During that same period the southern government – almost always Fianna Fail – made patriotic noises at regular intervals but did nothing to right the wrongs of the north or to make any movement towards the realisation of the goal of unity it claimed to revere. And of course when the crisis came in 1969 Jack Lynch, the Fianna Fail leader in whose footsteps Micheal would one day follow, announced that south could not stand idly by. Which it then proceeded to do.
Micheal has declared the north’s political institutions to be in a  “dysfunctional state” and that this provides a dangerous vacuum. The Irish Times this morning features his warning and accepts it unquestioningly. This, from a party leader in the south where under Fianna Fail the state crumbled under the weight of  corruption and mismanagement, leaving future generations to pick up the tab.
A blind man on a galloping horse could tell you what Micheal is really concerned with in his Arbour Hill analysis. He wants to underscore the ‘Republican’  in his party’s strap line ‘The Republican Party’, and in doing so lay claim to be the party that really cares about all of Ireland, not just the southern state. In other words, to win back those southern voters who currently see Sinn Féin as the only party which gives a damn about Ireland as distinct from the 26 southern counties.
Will it work? Well, when the SDLP abandoned its post-nationalist stance and emoted about its concern for the entire country, it didn’t work. The voters looked at them and then at Sinn Féin and decided to go for the real thing rather than the lite version. It’ll be interesting to see in the next opinion polls if Micheal’s Arbour Hill speech makes a difference. My guess is it’ll prove more of a cock sparrow than an eagle.