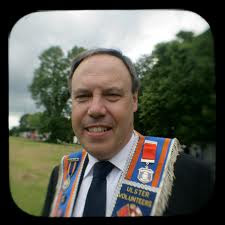 It’s good to see the DUP’s Nigel Dodds concerned about child abuse. There’s something particularly cowardly and cruel about taking helpless children and submitting them to your selfish desires. Hellish wouldn’t be too strong an adjective to use of such actions. Right?
The abuse Nigel is concerned about is the dressing-up of children in dark glasses and semi-uniform by their republican parents. As abuse goes, it doesn’t seem immediately cruel. Children love to dress up. When we were small, my sisters were forever getting into their mother’s shoes and clanking around the place; and I, like my classmates, was constantly to be seen darting around the Christian Brothers school-yard pretending to be a cowboy shooting Indians in the Wild West.
No, the abuse Nigel has in mind here is that the parents are inducting their children into a view of life and in particular the situation in Ireland. They’re encouraging their children to believe, however indirectly, that violent struggle against occupying British forces is commendable. That, as Nigel and many others would see it, is child abuse.
But then one person’s abuse is another person’s revered creed. In his book The God Delusion, Richard Dawkins claims that teaching children about religion amounts to a form of child abuse. Again, the act itself seems relatively non-abusive but, in Dawkins’s book, the belief behind it, being inculcated, is where the abuse lies. As a committed Christian, Nigel  would probably reject such an interpretation as a vile slur.
So what it comes down to is what you believe in. If you hold something to be valuable and noble, you’ll want to pass it on to your children. It might be religious faith, it might be atheism, it it might be a way of looking at the world, it might be politics. In fact, if you didn’t pass it on, your conscience might trouble you.
Ultimately, then, Nigel is saying he doesn’t like republicanism, especially republicanism which has suggestions of violence behind it. Just as lots of other people don’t like Orangeism and the history of sectarian violence behind it. And as Nigel is concerned for the welfare of children he believes are being abused by republicans, so Dawkins is concerned for children who are being abused by Christians and Catholics might be concerned about children who are being abused by anti-Catholic Orangeism.
If you believe the philosophy behind the dressing-up is misguided or evil, you will condemn those who induct children in such a philosophy. If you believe the philosophy behind the dressing-up is noble or glorious, you will rejoice in the chance to dress children up in the garb their fathers wore. Simples.

View all posts by Jude Collins →
Mr Edwin Poots and his disagreeable tweet
A councillor, his high horse and his withered fig-leaf