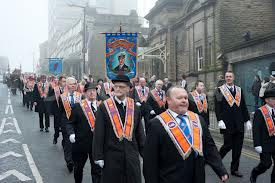 I was listening to the Nolan Show yesterday as I drove to the meeting of the British-Irish Secretariat yesterday and the difference between the two events couldn’t have been more marked. In the MAC Theresa and Eamon were all sweet reasonableness, feeling good about what’s been achieved and hungry to achieve more. On the Nolan Show,  a couple of bare-knuckle fighters were having a discussion about how the Orange Order had broken the terms of its march past St Patrick’s Church. It’s what you might call shadow and substance, the shadow being with Theresa and Eamon.
It’s an interesting institution, the Orange Order. I once said in a broadcast that it was an anti-Catholic institution and was told by a prominent Protestant clergyman that such a statement said more about me than it did about the Orange Order. And I expect lots of people listening agreed with him. But then again, that wouldn’t mean I was wrong. I expect the same will happen to what I now say.
The Orange Order is an anti-Catholic organisation. Anyone who has  taken even the most cursory reading of its founding and history will see that that is the case. Anyone who looks at the rules that govern it (I really don’t have to go into those again, do I?) will see that that is the case. Republicans in general and particularly Sinn Féin say that there are just a handful of contested parades, and that otherwise they have no problem with the Orange Order celebrating its culture. I disagree. If I’m right that the Order is anti-Catholic, then it isn’t simply at flashpoints that it becomes anti-Catholic  – it’s anti-Catholic everywhere.
“Total hogwash!” you’re saying. “For the vast majority of Orangemen and their families, the Twelfth is just a good day out – they have no wish to engage in anti-Catholic sentiment”.  That’s probably true. Many people belonging to the Order have, over time, detached their awareness of the Order’s nature and replaced it with what the Order delivers – a bit of craic in a boring summer.
But that doesn’t mean the Order’s nature is changed and it doesn’t alter the fact that there are some 3000 parades by the loyal Orders each year. The great bulk of those parades are intent on reminding Catholics/nationalists/republicans that ‘their side’ was hammered in battle hundreds of years ago. And then people affect to be surprised that Catholics/nationalists/republicans should object to the thousands of parades.
I believe there are many unionists  increasingly embarrassed by the Orange Order, its refusal to talk to the people it is offending, the general ugliness of many of its bands and the sneaking suspicion that what I and others say is in fact the truth: the Orange Order is an anti-Catholic institution. In a state where respect as well as equality are claimed as core rights, it’s really time it packed up its sectarianism in its old kit bag and left the stage.

View all posts by Jude Collins →
Eamon and Theresa: dancing in the dark
“It’s our tradition” and other rubbish

3 Responses to The Orange Order: marching to a different drum?