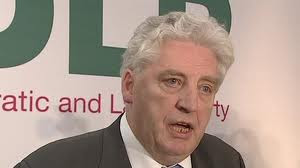 As I watched Alasdair McDonnell declare on TV this evening “This is all about victims!”,   I thought of the Dean of St Columb’s College when I was a boarder there. He was a strange man, the Dean.  Some evenings he’d patrol the refectory smiling and talking quietly to himself, chuckling from time to time. Other evenings he’d walk up and down with a face like thunder, and God help you if you looked at him sideways.
So how was he a soul-mate of Alasdair’s? Well, what would happen is this.  The Dean would catch you  (OK, me, me, not you) doing something forbidden – playing handball  against the wrong wall, reading a comic, smuggling a bottle of HP sauce into the refectory. Something bad like that. You’d be told to appear at his room at an appointed hour. He would then reach into his pocket, take out a strap and tell you to hold out first your right hand, then your left.   Four slaps if you were lucky, six if you were less lucky, ten if you were all outa luck. That strap hurt.
But there was a further sting on its way. Because on Saturday afternoons, we boarders would line up outside the Dean’s room and ask him if we could get out of the college for a couple of hours, into Derry, where we’d gorge ourselves on chips and sweets and smoke our heads off while watching Jane Russell being kissed by Gary Cooper on the silver screen. We’d form a long line and ask, and the lucky ones got a Yes. I can still feel the pang  of outrage when it came my turn, say two weeks after a leathering, and the Dean would listen to my request and then say “Would you run away out of my sight and don’t be bothering me”. Or put more succinctly – No.
One crime, two punishments. In law it’s known as double jeopardy.  Some countries have protection from it built into their constitution. That’s because  there’s something inherently unjust about punishing someone twice for the same incident.  But not here. Thanks to Alasdair’s law, the spirit of our Dean will live on.

10 Responses to Alasdair and victims