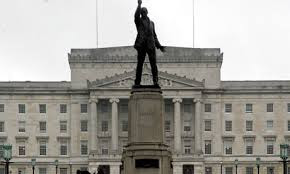 That great Englishman George Orwell believed there was a direct correlation between the use of words and the quality of thought they embodied. Where words were used awkwardly or in an ugly fashion, they reflected awkward and ugly thinking. I’m not sure about the ugly part but listening to Alex Attwood being interviewed on the Nolan Show  on BBC Raidio Uladh/Radio Ulster this morning felt as comfortable as the sound that dentists’ drills made circa 1957. Nolan played a clip of Dominic Bradley a little while back explaining why the SDLP would very likely vote against what has since become Alasdair’s Bill  (no, pace Jim Allister but it’s not Ann’s Bill – Alasdair was the man who made it happen). Nolan then asked Alex to explain the screeching hand-brake turn his party had made. Alex didn’t say it was less about victims and more about unionist votes in places like South Down, but you could tell something badly-oiled was clanking and grinding at the back of  his mind as he spoke.
The Belfast Telegraph has devoted an editorial to the bill,  lamenting how badly the SDLP have handled the whole affair but arguing  it was vital that Alasdair’s bill be passed. Again the language has that slightly high-pitched, fake note. Hardly surprising, when you have the job of explaining that it’s OK to have ex-IRA people in government but it’s a grievous insult to victims to have ex-IRA people (who’ve served more than five years) acting as a special adviser:
“They (ex-prisoners) are as entitled as anyone else to the vast majority of jobs, but it is uncaring and wounding to appoint people guilty of serious terrorist offences to positions at the very heart of the political administration. Quite rightly that will no longer be allowed when the bill becomes law.”
Mmm – ‘At the very heart of the political administration’. That sounds awfully like Martin McGuinness, Gerry Kelly and a few others you could probably add yourself. And yet the Bel Tel  strains every illogical fibre to argue that no, no, that’s different, that’s not a problem, it’s those pesky advisers.
Oh Orwell, thou should’st be living at this hour.