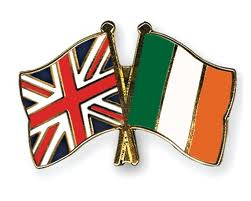 Ed Curran is offering some thoughts on sport and politics in the Belfast Telegraph this morning. Some of his contentions are predictable, others are gob-smacking to the point of incredulity.  Talking of soccer he says “The international team and its supporters are drawn from across the community. They occupy a uniquely shared space in the context of the new Northern Ireland”.

Blimey, Ed. That’s the Northern Ireland soccer team Neil Lennon once played for? And stopped playing for when he received death threats?  I must lead a sheltered life: I don’t know any nationalist or republican who is a supporter of the Northern Ireland football team. Maybe you can produce evidence to the contrary, Ed?
He goes on to say “if the British national anthem was not appropriate on Saturday afternoon at Windsor Park, can we look forward to the day when the Irish national anthem is considered just as unnecessary to the enjoyment of a GAA game?”
I’m afraid I see a difference between the crowd supporting Northern Ireland and the crowd watching Donegal beat Down last Sunday. The main difference being that one crowd would be composed of people supportive of the union with Britain, the other not supportive of it. But let me come clean on this: I don’t think we need to hear Amhrán na bhFiann played before every Gaelic game. Or any need to have the Irish tricolour flying. Just as I see no need for the British national anthem to be played before soccer games or the Union flag flown. Gaelic teams represent their club or county or sometimes province, but they don’t represent their country. And of course the state of Northern Ireland is not a country, so any team representing it should not be flying the Union flag.
Ed goes on from there to talk about flags and our coming super-councils:
“The obvious compromise is to apply the Stormont protocol of designated days across Northern Ireland. It is hardly asking too much for standards of flag-flying on public buildings to be agreed in the Office of the First and deputy First Minister and applied to the reorganisation of the new council districts.”
Mmm again. I know that’s a compromise was reached in Belfast City Hall and Stormont but I’m less sure that it’s a true compromise. Where half the population sees its loyalty as lying with Britain and half sees its loyalties residing in Ireland, a true compromise would clearly be one of two things: no flags or both flags.  Or is it that some loyalties are more important than others – that the croppies can consider themselves lucky their flag doesn’t end up flown on top of a huge bonfire? …But wait a minute…Um…Right.

View all posts by Jude Collins →
The police, the MLAs and a little old thing called trust.
Ken Loach and Irish bankers

10 Responses to Ed, football and flags