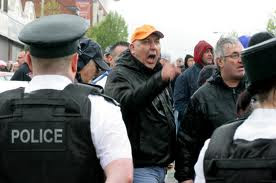 “Contemplate the wider betrayal of the trust that is indispensable in a functioning democracy, the trust between citizen and state that rests on the belief that security measures are always justified and proportionate”.
A quoted comment on Friday’s  PSNI work that sent one Sinn Féin MLA to hospital and endangered the life of another?  No, this is actually from a recent editorial in the Guardian, talking about the now-revealed attempts of the Metropolitian Police to discredit the family of Stephen Lawrence, a young black boy stabbed to death.
It’d be good if the editorial were made compulsory reading for all PSNI personnel. Particularly the bit about trust between citizen and state. When you’ve got people on your side – effectively doing your work for you by striving to maintain public order –  it’s not smart to lie to them or to put their lives at risk. The PSNI  are on a very sticky wicket this summer. Matt Baggott’s softly-softly tactics with the flag protestors seemed to have paid off, and he deservedly got some plaudits for it. But if he now approaches protestors in North Belfast with  people-ramming police vehicles followed by justification from unionist politicians, it’s putting at risk not just those involved, but public trust in the police themselves.
Maybe all PSNI personnel might also be given a brief history of the RUC so they can learn what bad policing does to civil order. Let’s hope Matt Baggott’s attendance at a Sinn Féin conference hasn’t left  him thinking all hearts and minds have now been won. The weather could turn out bad but we could still be facing into a long, hot summer.

3 Responses to The police, the MLAs and a little old thing called trust.