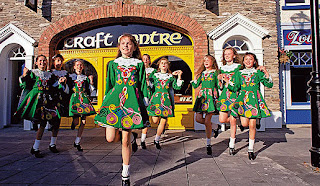 Did you know there was a war on? I don’t mean somewhere else  in the world (there are always several wars raging somewhere) but right here in our own little wobbly-lined corner?  It’s  a culture war, apparently, with the winners being those who produce evidence of a stronger, more appealing culture.  Now that the ceasefires have been called and the Good Friday Agreement firmly in place, we’re struggling to overcome each other with cultural weapons.
A better term for that would be arty-party propaganda.  Create cultural artefacts, celebrate those in existence, in order to get one up on the other lot. Alas, that’s an enterprise doomed to failure. The more you concentrate on producing/appreciating something so that it’ll be useful somewhere else – in this case the political arena –  the more you’re going to produce/express appreciation in a half-baked, skin-deep way that’s totally unconvincing.
I saw an example of that no later than last Saturday. The marching bands strutting their stuff to show they still wanted to pass the Ardoyne shops were supported by people, often women, carrying banners and signs. One placard in particular caught my eye: ‘Walking is our culture’. Sometimes you don’t know whether to laugh or cry. A form of exercise, a means of getting from A to B – but a culture?
There is no doubt that Irish culture here is flourishing, through song, music, dance and language. The best-known song on the unionist side is probably The Famine Song, the best known music that produced by the Lambeg drum,  the best-known dance  Scottish dancing and the best known language the interesting dialect that’s not a language, Ulster-Scots.
As a nationalist I’m happy to see Irish culture alive and thriving but I don’t see it as a weapon to use against my neighbours who have a different political allegiance. What I would hope is that my neighbours would realise that what’s seen as the other lot’s culture is in fact their culture as well.
In an interview with Frances Tomelty years ago, I asked her about competition and jealousy in the acting world. She acknowledge that it existed but saw it as a blot on the profession. In her view, good acting was something that all actors could learn from and share in; the road of begrudgery and spite led nowhere.
She could have been talking about culture in this tormented corner. Culture is there to be shared by all.  One group of people who realise that and are availing of it  are the many people learning Irish at the East Belfast Mission, led by inspirational people like Linda Ervine.  Such people have the wisdom to see that culture is most valuable when it’s celebrated in an open, inclusive way, not used as a weapon with which to bash over the head those we dislike/hate.