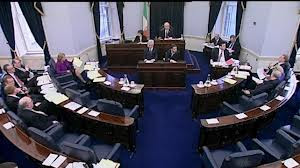 Would it be a good idea for the south to get rid of its Seanad? That’s a debate that’s running with some energy on the other side of the border these days. There’s talk of how much it would save were the Seanad abolished, much talk  about the Seanad holding  politicians to account, and the claim that it’s the Dail that needs reforming, not abolition of the Seanad.
Simon Coveney,  a Fine Gael minister was on RTE the other day talking about the need to get rid of the Seanad. Mary O’Rourke of Fianna Fail was on the same programme making the case for its retention.
The main argument against an upper House  (as in England) is that the people in it are not democratically elected. For example, I’m a graduate of the National University of Ireland and so am entitled to a vote that’d send three senators to the Seanad. If I’d been a graduate of Trinity College I’d have been allowed to vote for their three Senators. In other words, people who’ve been to university are seen as being somehow more suitable for voting candidates into the Seanad than the great unwashed non-graduate population. Once you start drawing those kinds of distinction, you’re waving goodbye to any real respect for equality.
The main argument in favour of retaining the Seanad is that it provides a check on the elected representatives in the Dail, that there’s a degree of expertise in the Seanad that can curb the wildness and possible ignorance of the Dail.  The answer to which, of course, is that those elected to the Dail should be informed and un-wild – they shouldn’t need another body to remind them to act responsibly.
And did I mention that each Senator gets paid at last count €65,000? You’d need to be giving some very wise advice to make that kind of money well-earned.
But actually, my own distaste for the Seanad is not that it’s undemocratically elected, not that they get paid too much, but that it’s duplication. Having elected TDs  to the Dail, the Irish people should tell them to get on with it, not pay grateful attention to an unrepresentative bunch of overpaid  layabouts shovelling fistfuls of money into their pockets, while the rest of the state’s population is struggling to keep body and soul together.

4 Responses to The Irish Seanad: another way to screw the poor