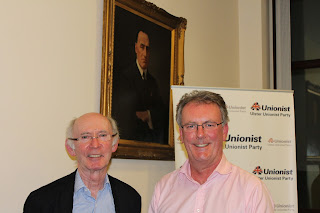 I took part in a Young Unionist debate at the UUP headquarters in Belmont Road on Thursday last. It was, you could say, an occasion of two halves.
The first half – well no,  not so much first half as good part – was the civility and warmth with which I was greeted. It wasn’t a huge occasion (our audience was small but perfectly formed) and it wasn’t something that made any great demands on me, but people were repeated in their thanks for my participating. They were young people I enjoyed talking to and debating with. Which is how these things should be: a differing political stance should not interfere with decent relationships between political opponents.
The not-so-good part…No, let me be frank. The depressing part was the view of politics  that emerged in the course of the debate and questions from the floor. The topic for debate was the SPADs bill and whether it was a good or a bad thing. In fact, the discussion ranged much more widely than that – back to the establishment of the UVF  and further. My reasons for being uncheerful?  I’ll try to list them as accurately as I can. If I get any wrong I’m sure I’ll be corrected.
So what’s depressing about all that? Well, it’s that these young men (mainly young men) were full of suspicion of republicans, full of resentment at what they had done, appeared to believe the state played no part in creating the conditions for conflict, and saw no validity of any kind in the notion of Ireland, north and south, as a country.
In terms of attitude, it could have been 1954 or 1961 – things would be fine if republicans would abandon their violent ways and  promise never ever  to revert to them again (that’s the conditionality thing), and drop this foolish notion of national unity. Meanwhile, the SPADs bill would soften Sinn Féin’s cough for them and would give no succour of any kind to dissident republicans. It would also let Sinn Féin know that because they’d been elected didn’t mean they could  enlist the hardline elements in republicanism to join them and work at Stormont.
In a way, the niceness of the people articulating these views made it all the more depressing.  Sinn Féin have a policy of outreach to unionism. Judging from Thursday night, lads, you have your work cut out for you.

View all posts by Jude Collins →
It takes two
The media: nostalgic for the violent past?

12 Responses to A night with Young Unionists: one reason to be cheerful and seven not.