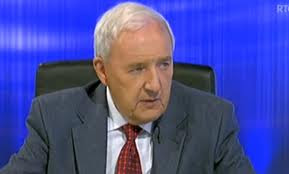 One of the ugliest commemorative sites I have been to is that at Béal na Bláth. But let’s leave the aesthetics for another time.  It was at the Michael Collins memorial site a week ago that Bill O’Herlihy made a speech which  got a lot of attention. In it the Fine Gael man echoed Fianna Failer Mary O’Rourke’s suggestion a few weeks’ ago that  a Fianna Fail and Fine Gael coalition would be good for the ‘country’.
First, Bill’s opening remarks:  “Michael Collins was a great man, a nation-builder, a visionary, a deep thinker about the future of Ireland and someone whose ambitions and aspiration is (sic) still, tantalisingly, unmet”.
You’re right there, Bill. Collins was also the man who organised the group known as the Twelve Apostles, who shot dead numerous officers in the Dublin Metropolitan Police before killing fourteen British agents in the early hours of 21 November 1920.  But Bill doesn’t want to linger with  – or even mention – stuff like that. He moves smoothly from the past to the present and evaluates three political parties.
“Sinn Féin deserves credit for the slow and tortuous progress that has been made in Northern Ireland and the party deserves the maximum encouragement to continue the process. But only Fine Gael and Fianna Fail have the proven trust of the people of the Republic over the past eighty years. They should examine and if necessary pool what they share and allow the people of this country to reap the benefits”.
While BIll was telling Sinn Féin to stay up north and was dangling the prospect of a Fianna Fail- Fine Gael coalition before the people of the south,  the TD for Louth, Gerry Adams, was making a speech at the McGill Summer School. The Sinn Féin president  sketched what the “proven trust of the people” had delivered in the south over eighty years:
“Religion was hijacked by mean men who used the gospel not to empower but to control, and narrow moral codes were enforced to subvert the instinctive generosity of our people…Those who suffered were mostly poor. The arts were censored. Our language undermined. Our culture corroded. Millions fled to England, the USA and Australia. A lesser people would not have survived.”
To give Bill his due, he’s not saying it was roses all the way for the past eighty years. Speaking as a Fine Gael man, it seemed to him Fianna Fail had made some mistakes. And maybe even Fine Gael.
“But in spite of all these reservations, I believe coalition of Fine Gael and Fianna Fail has much to offer at a time of huge challenge for Ireland. I suspect the Irish people would like to see this development. I would like to see this development in a new political landscape true to the ideals of Collins”.
Do you know, I think Bill’s right. Or half-right anyway. It would be a good idea for Fianna Fail and Fine Gael to get together. Historically they may have been different, but in practice they produced and produce the same results. And as Gerry Adams noted in his speech, they both have their “backs to the border” so why shouldn’t they join hands?
“But that’d mean a state with a permanent Fianna Fail-Fine Gael coalition government!”  you cry. I think not.  A few years of Fianna Fail plus Fine Gael would open the eyes of the most dim-witted, trusting voter. Fianna Fail has plunged the southern state into bankruptcy, Fine Gael has jumped in and is busy screwing the most vulnerable to the wall.  Put the two parties together and think  what a toxic mixture you’d have. Somehow, I don’t think that’s quite the vision Collins had. As that fine Fianna Fail leader Bertie Ahern once said in a different context: “Do they take the people for eejits altogether?”