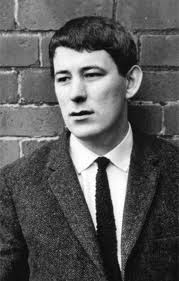 I remember Seamus Heaney. He was a Senior when I was a Junior in St Columb’s College, where he became (predictably) Head Prefect. He used, as I remember, walk round the grounds of the College with among others Kevin and Leo O’Neill, older brothers of the more famous Martin. Frequently as they strode past you’d hear them talking in Irish.
Part of his duties as Head Prefect was to keep order in the study hall before the supervising priest or teacher arrived. The traditional way to do this was to stand by your Head Prefect desk and periodically bang its lid and roar “Shut up!” This usually brought the hum of noise down for a while, until the next bang and roar, or the arrival of the study supervisor.
I sat at the far end of the study hall beside a boy called Murphy from Bellaghy. On one memorable occasion, we were whispering, maybe laughing at some witticism. Suddenly I had a sense that someone was standing behind me. It was Seamus Heaney. Occasionally the desk-banging and roaring would be seen as insufficient, and that’s what had brought the Nobel Prize winner to my side. He thumped me about the head  a bit, which hurt, but not as much as the fact that  Murphy the Bellaghy man, my co-conversationalist, got off scot-free. A failure in parity of disdain, I felt, although I hadn’t the words to go with it. Injured pride more than injured head.
For years I thought I was unique, and sometimes after a few pints would boast that I had been roughed up some by a Nobel Prize-winner. Then I did an interview with Eamonn McCann, for my book Tales Out of School: St Columb’s College Derry in the 1950s, and he revealed that he’d had an almost identical experience. “I met him at a festival down in Clare a few years ago and confronted him with it” Eamonn told me with that signature grin of his, “but of course he affected not to remember it. I heard later he went into poetry, no doubt in an attempt to cover up his thuggish past”.
Thanks, Eamonn. Now I can’t even claim a monopoly on Nobel Prize-winner bashings.  Damn.
They say the work of the poet is to make the ordinary extraordinary, and in that Heaney was consummately successful. I’d rank him with Keats, in his early poems at least – that ability to recreate the smell and touch and look of ordinary things –  raw potatoes, frogspawn, a blacksmith’s forge, a mother’s grief. And of course he made being from Bellaghy and every country place a matter of pride rather than uneasiness. As someone said, before Seamus Heaney the people from the bog tried to avoid mentioning it; now half the country is claiming to have been reared in bogland.
Ar dheis Dé go raibh a anam uasal