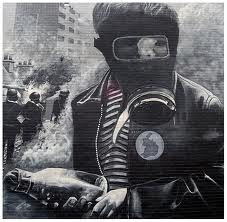 I was on Sunday Sequence this morning,  discussing the notion that today’s journalists secretly envy those who worked during the Troubles and tend to look for and exaggerate division to compensate. It was an interesting topic, although I think we strayed too far from it.
Anyway, here’s my own take on it.
Of course journalists today secretly lament that they weren’t around when the Troubles were at their height. Violence, injury and death from a human point of view are awful; from a journalistic point of view they’re great. That’s because the media thrive on bad news: no cameras out at JFK airport watching planes land safely and all that. People in general are hugely interested in the dramatic, the terrible. It thrills them.
That’s why even the humblest newspaper tends to report goings-on in the local court. Swindling and embezzlement can be interesting but you don’t have to work as hard when you’re reporting crime, especially that involving violence or death.
And it’s not as if our lives are affected by these disasters: most of us most of the time are blessedly free from dramatic violence. The fact is, our everyday lives are affected more by the economic recession but (i) most journalists know damn all about economics; and (ii) we’re more interested in gory stuff than we are in the competing theories of economics.
As for the media telling it like it is, they don’t. They select a portion of how it is and then try to make it interesting. The more innately interesting the selection, the less work for the journalist.  When I was a child, I used to be amazed how my father listened to the 15-minutes of news on the wireless every day. How come the amount of things happening in the world always fitted that little 15-minute slot? Never more, never less. I soon learned that news is that portion of what’s going on which the media decide to tell me, and to which they give their own spin.
So yes, I do think journalists hype up conflict here between parties and/or within parties. If they didn’t sex things up a bit, we’d maybe be bored and stop buying their product.
Final thought: when we read about politics here, we read too much about the past and/or simplistic divisions. It’s really easy to get worked up about flag-flying. It’s a bit harder to get worked up about looking at those things we have in common – ground on which we might build. By and large the media ignore that – it’s too hard and they’re scared we’ll switch off.

View all posts by Jude Collins →
A night with Young Unionists: one reason to be cheerful and seven not.
Kieran Doherty: is it OK for the PSNI/MI5 to lie about him?

5 Responses to The media: nostalgic for the violent past?