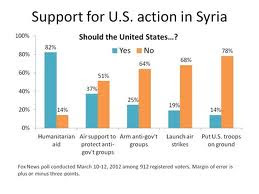 It’s always a risky business to speak for other people. “We all know” Vice-President Joe Biden declared yesterday “that there’s been a chemical weapons attack; we all know that the Syrian government are responsible for that attack”.
Well, include me out.  There may have been a chemical weapons attack, it may have been carried out by the Syrian government, but I haven’t  a clue whether there was or not and who was responsible. What I’ve seen has been a number of men, women and children milling around and acting more or less the way people reacted in the Bogside in 1969 when the RUC attacked them with CS gas – people dabbing at their eyes, looking distressed, some flat on the ground.
Nor has Joe Biden or any other leader convinced me that there is now justification for a military intervention. I saw a Syrian government official on TV last night and in halting English he said something very significant: “Show. Me. Evidence. Of. Chemical. Weapons. Use. By. Our. Government”.  Oddly, over something as distinctive as this, the media here seem very unforthcoming. You’d expect them to lay out in detail what a chemical weapons attack looks like, how it differs from other attacks in its effect, and how Britain or the US or anyone else can know that it was the Syrian government.
If it happened, it could have been US agents. You think that’s laughable? US agents have done worse things in, for example, South America. Remember Chile and Allende?  Remember the regime change in Iraq?  Remember, on a massively greater scale,   HIroshima and Nagasaki?  We know that, if they deem it necessary, the British government of any hue will concoct any story about the dangers to Britain and will use that as justification for invasion and slaughter.
On a much more local scale, I heard an equally skewed version of events yesterday evening as I drove home. Seamus McKee had Brian Feeney and Paul Bew  (Lord Bew to you) talking about the writing of recent history here. Former UUP adviser Bew believes that we have an ‘infantalized’ take on recent history here, which points the finger of blame to an excessive degree at Britain; he also insists that the NIO were the true progenitors of the Good Friday Agreement. Feeney was in fine form and noted how the British government has continually fallen  over itself in its efforts to keep hidden the record of what happened here during the Troubles.  I’m not a historian but I do know that the NIO were not the people who created the Good Friday Agreement. I also know that efforts to  present Britain’s role here as a benevolent ring-keeper is totally bogus. If you don’t think Britain was a central player, ask the relatives of those who died on Bloody Sunday or died in Ballymurphy. However hard unionists like the good Lord Bew may try to argue otherwise, they trip over their own fake narrative.  And I keep coming back to the thoughts of Jeremy Paxman as he interviews yet another politician: “Why is this lying bastard lying to me?” Britain would be the poorer without such men.
PS Did I mention that according to the Oil and Gas Journal, Syria had 2,500,000,000 barrels of petroleum reserves as of 1 January 2010? How remiss of me. Although of course it’s a concern for the well-being of Syria’s citizens, not a lust for oil, that has the US and Britain straining at the leash these days.

View all posts by Jude Collins →
No politics. This time it’s personal
What’s your view on the IRA?

6 Responses to "We all know" says Joe Biden. Oh really?