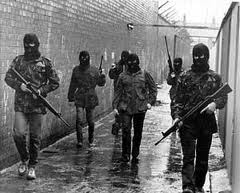 One of the core problems faced by unionists is the IRA.  Even though that organisation has  quit the scene it’s still a problem – a problem that soon gives rise to a range of contradictions.
Unionist opposition to the IRA is often rooted in personal or family experience. It’s hardly surprising if your father or uncle or other relative has been killed by the IRA, you’ll think of them as a conspiracy of murderers.  And even if you haven’t had that personal loss but have been used to seeing the unionist/Protestant people as the spine of this state, with Catholics/nationalist/republicans as comparatively feckless and opposed to the state’s very existence, it’s again not surprising if you take a dim view of the IRA. The fact is that there were at least  four combative groups here during the Troubles: the IRA, the loyalist paramilitaries, the RUC/UDR and the British army. If you were a unionist, it’s easy to see how you’d view the last two as the good guys, the loyalist paramilitaries as misguided but provoked into defending their communities, with the IRA the sole source of the Troubles and, in a phrase, murderous scum.
If that position is held,  and I think it is by many unionists, the question is, how do they regard Michael Collins, the anniversary of whose funeral was yesterday? How do they regard Tom Barry,  who fought the RIC, the Black and Tans and the other forces of British rule in Ireland? How do they see Cathal Brugha? de Valera?  Because all of these engaged in activities almost identical to those used by the IRA during our more recent Troubles in the north. If the IRA of the 1970s and 1980s were murderous scum, what were the people I’ve listed above? Were those who initiated the Easter Rising murderous scum, without a mandate from the people for their actions?
If you say yes, then you’ll see the centenary events for 1916 and after as honouring murderers with a contempt for democracy.  If you see Collins and Barry and Brugha as patriots, how do you combine that assessment with dismissal of the more recent IRA and all its works and pomps?
And it’s not just unionists in the north that this presents a conundrum for. Many people in the south – most recently and memorably  Dervla Kirwan , whose great-grandmother was Collins’s sister. She got herself in a terrible knot trying to applaud the heroics of her ancestors and the IRA of the time, while condemning the more recent conflict and all violence generally.
And to be bang up-to-date, I wonder what she thinks of the violence  in Syria at present, and how she sees the proposed use of cruise missiles by the US and the British as contributing to the peaceful lives of those on whom they may rain down.
I am open to the opinion of others,   even when I don’t like them and/or their opinions. But what has me near despair is when people risk a hernia trying to hold mutually-exclusive positions simultaneously.

12 Responses to What’s your view on the IRA?