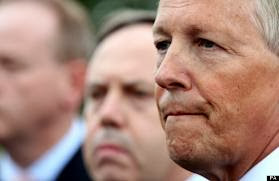 Crisis – what crisis? People would want to cool their jets a bit. That’s the view of this cleverly-carved little statelet’s First Minister.  He’s familiar with this sort of thing, he says, and people have to keep a sense of proportion.
Is he right? Wrong? It depends on how you see things. If you see that Castlederg republican commemorative march as deliberately provocative, you may well agree with the First Minister and feel that it was intended to be offensive to victims.  On the other hand  if you see the Castlederg parade as one commemoration of those who died on the republican side, as opposed to about twenty  marches which progress through the heart of  Castlederg each year commemorating those on the British side, if you believe you’re entitled to hold a march that’s been sanctioned by the Parades Commission and which altered its route so as to avoid excessive offence to victims or their families,  you may think that the unionist reaction to Castlederg is a bit like a man with food all over his face and in his hair  berating a family member for having a crumb on his chin.
Then there’s the whole question of trust. The fact is, the DUP agreed to the construction of a peace centre on the Long Kesh/Maze site. Then a year or so down the line, they decided all bets were off. When they said they were firmly committed to the notion, that was just conditional really: they could pull out at any point they wanted.
Unionists like to think of themselves and are often portrayed as hard-headed: no fancy words, no faking it, what you see is what you get, my word is my bond. Yet here we have the First Minister making it perfectly clear that doubling back on his word means little or nothing to him. Crisis? What crisis?  Can you imagine going into business with someone like that? Who on any given morning is likely to call you and tell you the document they signed up to yesterday no longer holds, they’ve changed their mind?  It’s my guess no hard-headed or even semi-soft-headed unionist would tolerate such conduct in a partner. Their association would end  on the spot.
And do you know what? I think they’d be right. Either the DUP understands to the marrow of its bones that double-talk like this spells the end of shared government, or Sinn Féin folds its Stormont tent and lets the British and Irish government move in to run the show. Didn’t somebody once say it’s deeds that count, not words? Too true, too sadly true.

4 Responses to Crisis? What crisis?