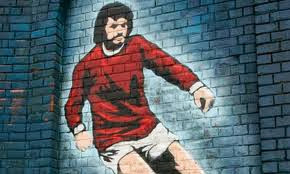 So. Farewell George Best, hello masked gunman. The mural of Best, who first played for Manchester United just fifty years ago, has been painted over by the figure of a masked gunman. Dr John Kyle,  the former PUP leader was on Raidio Uladh/Radio Ulster last Monday morning, saying how much he objected to this and hoping that somehow, sometime, the process would be reversed.
Mural paintings in Belfast are an interesting feature of the city, one on which Professor Bill Rolston has written extensively.  They are generally seen as reflecting the mood of the community. The murals to be seen in West Belfast, for example, have changed radically over the past couple of decades and been effectively demilitarised. That’s seen as the community  supporting the peace process in which republicans are engaged. So does the ex-George Best mural show the reverse of this? A community whose mood has swung from acceptance of a more peaceful future to a paralimilitary, aggressive stance?
It may be. Certainly there seems to have been no lack of man – and woman – power in the massed ranks of those who attacked the police at various points over the last six months. This would suggest that the flag protests, which are widely believed to be supported by the UVF,  are also supported by the people of East Belfast. Then again, it could simply be that there is a substantial and aggressive group engaged in flag violence whom most people in East Belfast would disown but they are too busy going about their daily lives to feel the need to adopt a public position.
There’s a third possibility: that the people of East Belfast, like Dr John Kyle, are opposed both to the flag protest and the replacement of the Best mural with a militaristic image, but are cowed by the UVF into keeping their heads down and saying nothing.
My guess is that the last possibility is unlikely. The notion of a paramilitary organisation holding its community to ransom is one we’ve heard before, and in the past it’s been directed at the IRA. I think it had limited credibility then and it has limited credibility now. Mao Tse-tung spoke of the guerrilla as swimming in the pool of his people; when sympathy for the actions of the guerrilla dried up, militant activities become impossible. I don’t see the UVF as having its boot on the neck of the East Belfast people.
The first possibility – that the UVF/flag protestors are acting with the unambiguous support of the people of East Belfast – is also unlikely. The people in that part of the city as well as other parts are war-weary. Many of them remember the bitterness of the conflict and the suffering it entailed. Many of them want a new beginning and that’s reflected in the election of Naomi Long of the Alliance Party.
I suspect the truth is a mixture of two and three. That is, most people are too busy doing the things we all do – earning a living, raising a family, watching TV, planning a holiday – that they have little interest in radical politics. Or any politics. At the same time, those who regret the movement backwards towards armed violence may well be nervous about what might happen next if they were to speak out. So the combination of a lack of interest and a modicum of fear means the way is open for the elimination of Ireland’s most gifted soccer player in favour of a masked gunman.
It’s a regrettable situation but it could be worse. Imagine this: Belfast wakens up one day to find republicans have blanked out a peace wall and replaced it with an armed volunteer, ready for action. Can you imagine the reaction?  The air would be thick with the voices of unionist politicians condemning the mural and declaring it as proof-positive the IRA hasn’t gone away. The very foundations of power-sharing would tremble before such a re-painting.
But since it’s unionist paramilitaries, the mural will remain and nobody – certainly not our mainstream media, certainly not unionist politicians – will ask the obvious questions: isn’t the UVF supposed to be a proscribed organisation? And weren’t they supposed to have disbanded ages ago? If I’m wrong and they are calling for answers to these two questions,  their microphone appears to be not working.

View all posts by Jude Collins →
Crisis? What crisis?
President of Ireland? Then gisse a vote