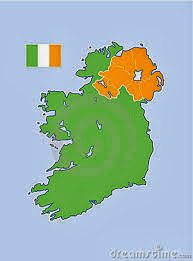 There’s an interesting article by Paul Gillespie in today’s Irish Times  in which he uses the word ‘through-other’ as a kicking-off point for consideration of the need to break down barriers between people here in the north. He talks about the need for a Bill of Rights and a Civic Forum:
‘Their potential is heralded by the gradual if hesitant emergence of a Northern Ireland identity claimed by up to one third of respondents in recent surveys, distinct from unionist or nationalist ones and drawing on all traditions”.
I wonder who was the clever dick who suggested including  ‘Northern Irish’ as a category in the last census form here? Could it have had anything to do with the increase in the proportion of the population which is of Catholic background?  By opening a third door, distinct from the usual British/Irish identification,  the possibility of frightening the unionist horses was minimized.
At the same time there’s no doubt that people north of the border do have a distinct identity from those living in the twenty-six counties. How could you live under British rule for a near-century without developing characteristics different to the rest of the people of Ireland?
That granted, have you ever met a Mayo man or woman that didn’t have a different view of the world from a Meath person? Or a Kerry man or woman who wasn’t strikingly different from a Dublin man or woman? Or do you think Cork people see themselves as the same as Kerry people?  Like England, like Scotland, like most countries,  different parts of our country shape people in different ways. The northerner is different,  just as every other section of Ireland is different; but s/he has an extra layer of difference that’s been shaped by British rule.
This extra dimension of difference has been seized upon by commentators to declare that we here north of the border have an identity we share only with each other. Well yes. Except that some of us enjoy/embrace this difference from the rest of Ireland; these we call unionists. Some dislike/resent the difference from the rest of Ireland; these we call nationalists/republicans.
We have it on the authority of no less a figure than Margaret Thatcher: it’s not what happens to you that counts most, it’s how you react to it. So please, Paul Gillespie and others. Because a lot of people here recognise that we live in the six counties doesn’t mean we’re about to abandon our British/Irish identity.

View all posts by Jude Collins →
Up for the match? Or busy boycotting such coat-trailing?
Fresh thinking? Or…

15 Responses to How ‘Northern Irish’ can you get?