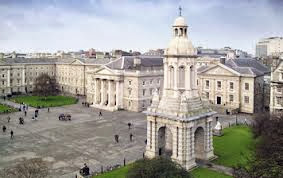 I don’t always agree with Fionola Meredith but she has a worthwhile article in today’s Irish Times.  Her son has just started his studies at Trinity College and she notes that the number of students from the north going south to study and vice versa is shrinking.
It’s an issue that hasn’t been addressed and should be. The Scottish government with one stroke of the pen did what seemed impossible: it had sixth-formers at Protestant schools here (and please don’t start telling me they’re not Protestant schools – if they’re largely attended by Protestants they’re Protestant schools) lining up to get an Irish passport. For why? Because as EU passport holders they were entitled to skip paying fees but as as British passport holders they were not. Simples.
But it goes beyond getting a cheaper deal. Before the flag thugs ruined everything, we used to do a house-swap with families from different countries. Living embedded in a district in San Francisco or Toulouse or southern Italy, you got a sense of people and their lives that was impossible as a normal tourist to those countries. And having both taught and studied in the south, I know how valuable the experience can be in understanding my country south of the border.
And yes, Virginia, there is a need for it. Ignore if you can the increasingly-partitionist tone of the southern media. Instead do the math(s).  As Meredith notes,  southern students constitute just 4% of students in higher education in the north; northern students make up 2% of those in the south. If you’re someone who regards the south as a foreign country you should still be appalled by these figures: they do little towards fostering good neighbourly relations. If you believe that south of the border is part of your country, you should be leppin’ mad – not just at the pathetically small figures of transfer but at the need for two separate education systems at any level.
John O’Dowd: please note.

9 Responses to Learning to stay apart