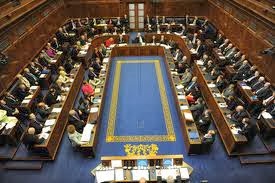 The Assembly the other day was a fine place for an irony-collector to be. Anxious to get off the hook of his U-turn over the Long Kesh/Maze peace centre, Peter Robinson produced from his pocket a very red herring …What’s that, Virginia? Was he ashamed of his U-turn? No, no, no. Jim Allister was attacking him, not for his U-turn, but because a U-turn was ever necessary. He was chiding Robinson for ever having been in favour of a peace centre.
That was the first irony.  The second irony was that Robinson’s red herring consisted of the charge that Jim Allister had ‘done business’ with republicans. Eh? Yes indeed, Robinson alleged – he’d been somehow involved in a will which had meant he was doing business with republicans. To wit, he’d been involved in selling them land. Pot calling the kettle black and all that. How did Jim Allister respond? He denounced the charge as a scurrilous untruth. In short, he agreed with Robinson – to do business and especially to sell land to republicans would be a shameful act. And he hadn’t done it.
The irony wasn’t over. The BBC filled in the background for viewers by explaining that in some border areas, the sale of land from Protestants to Catholics is a contentious issue. No, Virginia, there’s no point in your swooning. That’s what they said. Without once bursting out laughing.
When my father in the 1930s bought the farm on which I was raised – and it was miles away from the border – he had to get a decent Protestant neighbour to put in his bid for him. Had it been known that a Catholic wanted to buy the farm which was owned at the time by a Protestant family, he wouldn’t have had a chance. I used to think this was one of those family myths that gained credence by the telling. Only then I found when I mentioned it to other Catholics, as often as not they had a similar tale to tell. In other words, the BBC was telling its viewers something a considerable number of them knew already. And had known for decades.
Agreeing to a peace centre seen as a retrograde step; ‘Doing business’ with republicans seen as a shameful act, especially if land is involved; the BBC discovering that this kind of thing has been going on for decades. Does irony come any thicker and faster?

View all posts by Jude Collins →
Fresh thinking? Or…
Learning to stay apart