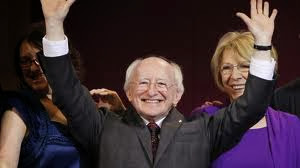 Barry McElduff is a very effective politician for a number of reasons, among which his good humour and his being a Tyrone man feature prominently. He was on the  Sunday Politics show on BBC One this morning and he was talking about a subject that has potentially profound implications: who can vote for the Presidency of Ireland.
It seems that after some pressure, particularly from the north but also from ex-pats in the US,  there’s a real possibility that people beyond the borders of the twenty-six counties will be able to vote in the next presidential election. That makes sense: if someone is going to be called the President of Ireland, it’s a bit daft having one and a half million Irish people deprived of a vote. Noel Doran, editor of the VO/Irish News, was quick to reassure those who might worry about such things that even if Shinners from the North had been able to vote in the last presidential election, Martin McGuinness would still have finished third. He didn’t tell us how the inclusion of  (among others) northern voters might have affected southern voting patterns. My guess is that, just as a united Ireland would be more than just the north bolted onto the south, so too the extension of voting rights to Irish people in the north would have  considerable impact, one way or another, on  southern voters. For the partitionists in the south, it’d most likely stiffen their partitionism. For non- or anti-partitionists, it would have a similarly galvanising impact.
Mark Carruthers, chairing the discussion, put it to the DUP’s representative that this could be seen as the thin edge of the wedge, to make the Irish presidental race the outcome of votes cast by Irish people everywhere but notably the north.  It’s a  good point. It could well be that it might raise/deepen in many minds the notion of all Irish people on this island voting for other representatives, not just the president. In short, it might hasten the demise of the border, a consummation devoutly to be wished in the humble opinion of this scribbler. On the other hand, it might be the southern political parties throwing a bone to northerners in the hope they’d be more comfortable with the division of Ireland and exclusion from elections where real power was at stake.
No one, I noticed, mentioned that the next presidential election will be in 2018, by which time there’s a good chance that nationalists/republicans will be in the majority in the north. Which would of course mean a referendum vote that’d make the Irish presential election look fairly mild beer.

6 Responses to President of Ireland? Then gisse a vote