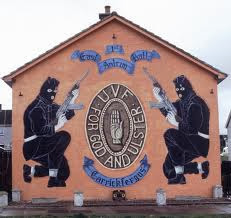 Were you at that UVF commemoration on Saturday? No, me neither. But thousands were – 10,000 is the figure most sources quote. Men dressed in period costume,  carrying replica weapons, marching in columns. They were inspected by Billy Hutchinson, who played the role of Edward Carson and wore a top hat.
What’s sort of surprising is how low on the news agenda this event was. Ten thousand people, men shouldering replica rifles,  the re-enactment of events which by any definition were, at the time, illegal as well as disloyal. Maybe the media played it down through embarrassment over Billy in that hat. Or maybe  reporters were concerned to play down what could be seen as a veiled threat.
What’s that?  No threat of any kind involved in Saturday’s event, it was simply a re-enactment of  a historical occasion from 100 years ago?  You could be right. But  here’s the odd thing. When I interviewed unionist politicians for my book Whose Past Is It Anyway?,  it was made clear that come 2016, any re-enactment of Easter Rising events, with men carrying replica weapons, etc, would be seen as a veiled threat that what had happened in 1916 could happen again.
So which way would you lean yourself?  With those who’d see this as simply a historical re-enactment, full stop; or a historical re-enactment cloaking hints that the present-day UVF hasn’t gone away, you know?

View all posts by Jude Collins →
President of Ireland? Then gisse a vote
That UVF commemoration

2 Responses to That UVF commemoration