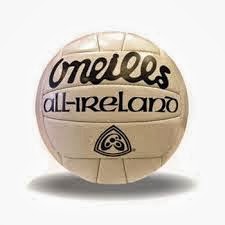 I remember Freddie Perkins.  He came from Watson Park, an all-Protestant housing estate beside our farm, and he smiled a lot.  He also was a pretty hand-goalkeeper. He played soccer but (pace The Ban) he also played Gaelic. I can still see him diving  and punching clear one of those old-fashioned brown leather footballs.
I’m thinking of Freddie because later this afternoon, along with hundreds of thousands of my fellow-countrymen and women, I’ll be watching the All-Ireland Gaelic Football Final. Not on BBC NI of course – it covers games only when there’s a northern team involved. So even though Tyrone Minors are playing in the final, the BBC cameras will be taking a rest.  South of the border doesn’t exist – check the BBC map next time you’re watching BBC Newsline 630.
Having played it when young and watched it for years, I find Gaelic football a hugely attractive game. It’s got so much better as the level of skills and training has been raised and thoughtful managers lifted teams to heights they never dreamt of. So why are the Freddie Perkins so thin on the ground? I seem to remember  a Protestant player on the Down team a decade or two ago, but that only proves how rare an occurrence it is.
Maybe it’s because the Irish tricolour is flown at big games and  Amhrán na bhFiann is played. Personally I think the playing of national anthems and the flying of national flags at sporting events is  a bore. Most people and players don’t know the words of Amhrán na bhFiann and they love to interrupt the final line of it with roars of encouragement for their team. I wouldn’t, though, be in favour of doing the cringe-making thing that rugby does and substitute the national anthem with Ireland’s Bawl or some such. So if it were abolished tomorrow I wouldn’t mind – in fact it might stop some people feel they’ve done their patriotic duty when they face the flag and pretend to sing. It also might encourage more Protestants to share, as players and audience, a game that at its best makes soccer look slow and unnatural.
But maybe I’ve got it wrong. Maybe Protestants boycott this wonderful game for other reasons completely. And I’m sure they’ll let me know. Anyway, must dash. Got an appointment with a television. And did I mention that the present Mrs Collins is from Mayo?

View all posts by Jude Collins →
Oh my God – what’s that coming up the road?
How ‘Northern Irish’ can you get?

8 Responses to Up for the match? Or busy boycotting such coat-trailing?