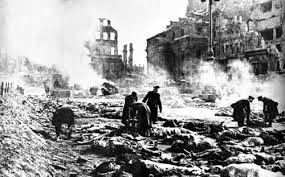 I wonder how those who lost loved ones in the recent conflict here feel about the Shankill bomb commemorations.  Perhaps they feel a sense of solidarity, identifying their own suffering with the suffering of those innocent Shankill victims. Or perhaps they feel like the victims of the Dublin/Monaghan bombs:  why are other acts of carnage remembered and theirs forgotten?
Nobody who has heard Alan McBride, who lost his wife and father-in-law in the bomb, could fail to be impressed by his response to the  appalling loss that was inflicted on him. Rather than find new ways to condemn those responsible for the bomb, he looks for ways to help those who have suffered and to work so that such things never recur. The loss of a single life to violence is a terrible thing. The loss of so many in a tightly-knit community is catastrophic. And yet McBride has somehow risen above this and gathered good out of what was bad. I was listening to a Protestant minister, I think it was, talking on Radio Ulster/Raidio Uladh this morning. He was asked how he regarded Thomas Begley, the bomber killed in the explosion, and he said he’d prefer to focus on the Shankill people and their suffering. When Alan McBride was asked a similar question a couple of weeks ago, he said that he’d been hurt on the first anniversary of the bomb by the sound of bands apparently celebrating what had occurred. As to a monument or more accurately a plaque to Begley, he said that if this was done quietly and without deliberately adding to the pain, he saw how it might help those who had loved the dead man and he had no objections to that. It’s those kind of sentiments that for me mark McBride as a man of outstanding forgiveness and compassion.
What made the Shankill bomb so brutal? Because it killed innocent people. The IRA said that their goal was not those people in the fish-shop but a UDA meeting scheduled to take place above the fish shop. However, as has been pointed out to me, that still leaves the question – beyond the obvious dangers of carrying a bomb into a densely populated area – of how the UDA meeting could have been bombed without loss of innocent life.
It’d be true to say that Thomas Begley and Sean Kelly are hate figures in the Shankill. Others outside the Shankill remember Begley and treat Kelly with respect. Appalling? Before you decide this, consider these words:
“The destruction of houses, public utilities, transport and lives, the creation of a refugee problem on an unprecedented scale, and the morale both at home and at the battle fronts by fear and intensified bombing, are accepted and intended aims of our bombing policy. They are not by-products of attempts to hit factories.”
That’s Sir Arthur Harris speaking during WW2, commonly known as Bomber Harris or Butcher Harris.  He was decorated and a statue erected to his memory.

11 Responses to Bombing and reactions