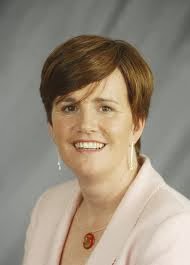 Caitriona Ruane is taking a pummelling, this time from the SDLP and the unionist representatives on the Assembly Commission. It seems Ms Ruane wanted to provide answers to MLAs’ questions in both Irish and English. The Assembly Commission voted her down, the SDLP representative voting with the unionists on the Commission and only the Alliance member siding with Ms Ruane.
I find myself mildly conflicted by this. On the one hand, Caitriona Ruane will have to accept that the ruling has been made by a democratic vote – just like the flags issue in Belfast City Council. On the other hand, the Assembly Commission is wrong.
If you check the St Andrew’s Agreement  of 2006 you’ll find that it committed the British government to work with the incoming Executive to protect and enhance the development of the Irish and Ulster-Scots languages.
If you check the Good Friday Agreement, you’ll find that amendments to it commit  all hands to ‘recognise the importance, respect, understanding and tolerance in relation to linguistic diversity, including in Northern Ireland the Irish language, Ulster Scots and the languages of the various ethnic minority communities, all of which are part of the cultural wealth of the island of Ireland’.
I wonder how those in the Assembly Commission who voted down Caitriona Ruane’s wish to speak in Irish as well as English square that with their commitment to the Good Friday Agreement?  I suspect they can’t. When Caitriona Ruane wanted to get her complaint included in the Assembly Commission’s annual report to the Equality Commission, she got another thumb’s-down.
Maybe the Assembly Committee, as well as re-reading the Good Friday Agreement, might want to check out the system in a place like Canada. There, the English-speaking majority make a genuine effort, in terms of public documents, speeches and the like to support the minority French language.  They might also want to remember the late Monsignor Denis Faul’s contention: ‘There’s nothing like a touch persecution to energize the faithful’.

View all posts by Jude Collins →
The police, 1987 and Áine Adams: the gorilla in the toilet
Peter Robinson and the GAA

17 Responses to Caitriona takes a kicking