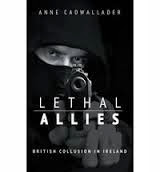 Sometimes you wonder.  Back in 1988, an IRA unit composed of Danny McCann, Sean Savage and Mairead Farrell were shot dead in Gibraltar. They were planning a bombing mission but at the time of their killing all three were unarmed. But that wasn’t the story that was put out: officially, they were three deadly bombers who made moves which led the British team which killed them to fear for their lives. Did the publicly-funded BBC, renowned throughout the world for the impartiality of its news reporting, push further into this version of events and discover the truth? Nah. That was left to Thames Television, a commercial station. Their ‘Death on the Rock’ showed conclusively that all three were executed while unarmed.
Which brings us to this weekend. The former journalist Anne Cadwallader, who was a researcher with the Pat Finucane Centre in Derry, has produced a book called Lethal Allies. In it, using detailed and irrefutable evidence, she shows how time and again members of the RUC and UDR were involved with the killing of over 100 innocent Catholics in what was known as the Murder Triangle. You may respond with a shrug and say “So what else is new?”  Rumours of ‘security’ force collusion have been rife for decades. The difference is that Cadwallader has checked and rechecked and footnoted in detail her sources for claims and there’s just one conclusion you can come to  (providing you’re not Jeffrey Donaldson, that is): the deadly work of loyalist murder gangs was at best given a green light by the authorities and at worst was actively assisted by them. There’s even a case of a policeman who was involved in a murder hurrying back to his desk so he could take a statement about the killing from a witness.
A few rotten apples? Read the book and see if that’s what you still think. According to Cadwallader, what was going on was given a nod and a wink by people at the very top of security and government. Read and weep. And weep again that it takes individual journalists like Cadwallader in conjunction with the Pat Finucane Centre to dig up the buried evidence. Where was the BBC? Where was our mainstream media, north and south? Pass.

27 Responses to It goes all the way to the top