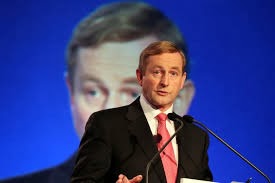 It’s hard not to like Enda Kenny. Even admire him. There he was on Saturday night, at a specially-convened Fine Gael conference that was supposed to be celebrating their victory in the referendum on the Seanad. But was he embarrassed about ending up with a referendum defeat on his hands? No chance. ‘Fine Gael – Getting Ireland Working’ the big banner behind him said, and you’d be forgiven for believing that that was just what had happened. Or was happening. Or was going to happen. Maybe.
Two moments stood out, I thought. One where the Taoiseach referred to the Seanad and how, having accepted the democratic will (as distinct from ignoring it and mounting a coup d’état), his government was now (big pause here for effect)…going to extend Seanad voting powers to all graduates!  Woo-hoo, yippee, long live democracy.
The other part was where he talked about the good shape the ‘country’ was in. “Ireland is on-track to exit the IMF-EU bail-out in December 2013!”  Thunderous applause, even from the woman doing the deaf sign-language.  Mind you, the budget on Tuesday will be tough, but Ireland is on-track to exit the IMF-EU bail-out! Great stuff…Um, does that mean the southern state is going to be – whisper it – debt-free in December 2013? Yerrah man, debt-free, have a bit of sense would you? It means that the south will be able to go back to the markets, that’s what it means! Yippee, hooray…Um, what will they do when they get there? To the markets I mean. Well, it means that, er ah diddly-dee, it means that  the state will be able to go to the markets and borrow there!  Now, great news or what?
It really is hard not to like Enda Kenny. It must be the way he tells them.

View all posts by Jude Collins →
Reasons for ringing the Ombudsman
The police, 1987 and Áine Adams: the gorilla in the toilet