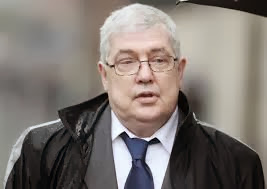 The media, as you know, are the watchdog of our society. Without them, we would be at the mercy of corrupt governments. But we have them and they bring us information that is vital to our healthy democracy.
Take the Liam Adams case. Liam Adams has now been found guilty by a court of law of the sexual abuse of his daughter. The case was reported in detail by the press, radio and television, bringing us quotations from the witnesses for the defence and the prosecution on a daily basis. We needed to hear all this because…That’s right. Because he is Gerry Adams’s brother. If you don’t know that by now, you’d need to check with the hearing equivalent of Specsavers, because since the get-go, Liam Adams has never just been Liam Adams. He’s been Liam Adams, Gerry Adams’s brother.
And of course we needed to know that, because, because, um, because it tells us more about Liam Adams. No, sorry, strike that. Because it tells us more about Gerry Adams. That the leader of Sinn Féin could have a brother like that, well, I mean. Flawed pedigree and all that. It’s a bit like a man up the country I once went to interview. It’d all been agreed, I thought, but when I arrived the man  wasn’t having any. No interview. I was at a loss until he eventually let slip that he’d had a falling-out some fifty years earlier with an aunt of mine. So since I was her nephew, there’d be no interview. I tried to tell him that maybe this was a bit unfair – punishing me for my aunt’s actions. Didn’t matter. No interview. Clear off.
In this case it’s clear off Gerry Adams. “Not Fit To Govern” one headline declared. Mmm. So  Martin McGuinness, who by his own admission was a senior member of the IRA, is fit to govern and has been doing so with some success for several years now; but Gerry Adams in some hypothetical future time will not be fit to govern because he didn’t go to the police quickly enough for the media’s satisfaction.
None of  this, of course, has any connection to the fact that the latest polls in the south show Sinn Féin, the party Mr Adams leads, as being the second biggest in the state, and Mr Adams himself the second most popular leader. None at all.