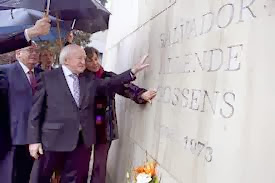 “We in Ireland are also aware that redressing the consequences of conflict takes steady, careful work, involving as it does not only conflicting memories and narratives of the past”.
That’s President Michael D Higgins speaking in El Salvador.  As he reminded his audience, he’s always had an interest in the triumph of truth and justice in that far-off country.
That’s good to know. Living on an island we tend to be a bit  insular in our thinking and it’s good to view the world beyond our narrow borders.
On the other hand, you can get excessively engrossed elsewhere. Someone (no, Virginia, I can’t remember who and I’m too lazy to check) once distinguished between a lunatic (from the Latin for ‘moon-struck) and an idiot (from the Greek for ‘one’s own’) by saying the lunatic is one who strides along dangerous ground, eyes firmly fixed on the heavenly firmament; while the idiot  is one so caught up in the local, they cheerfully milk their cow while war rages all around.
I would never call President Higgins either a lunatic or an idiot – he’s patently neither – but I do worry a little at his tendency to champion causes far from home while giving rather less attention to matters nearer to hand. For example, President Higgins spoke at the University of Central America where six Jesuits, their housekeeper and her daughter were murdered by government forces in November 1989.  Anne Cadwallader has just produced a book called Lethal Allies  which carefully charts government and state forces’ collusion here in the deaths of over 120 people in the ‘Murder Triangle’ in the early  1970s.  I do hope the President finds time to speak out against these state killings so much nearer home and  20 times as numerous.

View all posts by Jude Collins →
It goes all the way to the top
Newspapers and painting the historical picture.