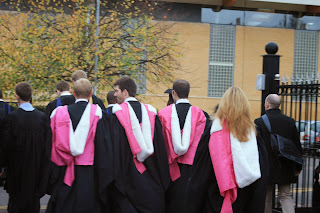 I was over in Cambridge last weekend to attend a graduation, and not for the first time it struck me how different the English are from us.  For a start, they look after their villages better. Where we have gone for ribbon development  –  house after house after house fronting the road on both sides of the village – the English villages have a shape which in many cases preserves buildings from the past. Development is done in such a way that the centre of their villages are made up of old stone buildings arranged to give the village a heart. Put bluntly, the English take better care of their present and their past.
But the thing that impressed me most about the difference between us and them was the graduation ceremony.  It was held in the Senate House of Cambridge University, which we were reminded was build in the eighteenth century. We were also warned about the graduation ceremony itself. There’d be none of your clapping and whooping that you’d get at an Irish graduation ceremony. No cameras either. A guy in the row in front of me showed a brief glimpse of his camera before the ceremony started and a flunkey was onto him like a flash. “No photographs, sir. It’ll be thrown away!”  The camera was quickly resheathed.
Then there was the language. Apart from the warning about where to go in the event of an emergency, there was scarcely a word of English spoken from start to finish. All Latin. There was a great deal of hat-doffing and bowing by Proctors, Deputy Proctors, Pro-Proctors, University Marshals and Esquire Bedells. The graduands in groups of five approached the degree-conferrer, who sat on a sort of throne. When they got there, the Dean of their Faculty (I think) put his hand out and the graduands each put a hand on top of his. Then the Dean did some Latin-talking to the degree-dispenser, apparently telling him that he was OK with these students of his getting a degree. Then – and this was the bit that really stuck out – then the graduands knelt one by one before the conferrer and put their hands together as if in prayer. The degree-conferror then put his hands around the graduand’s hands and said (in Latin of course) “OK, I’m giving your degree now  – aren’t you glad?” Or words to that effect. The graduand responded in Latin, stood up, took a step backwards and bowed, before exiting the stage.
Did the fact that nine-tenths of the audience hadn’t a clue about what was being said upset them? Not a whit. Was there whispering and sweet-opening and babies crying during the ceremony? Uh-uh. Hushed silence would describe it best. The more baffling the ceremony, the more impressed they were. I spoke to a couple of young graduands later that day and mentioned that I thought a lot of the ceremony was ripe for a Monty Python sketch. Oh no, I was told.  They liked it. “It’s amazing to think that these traditions are eight hundred years old. Don’t change a thing!” It was as if the 1960s had never happened.
George Bernard Shaw said all professionals are in conspiracy against the laity. Right again, G B. The ceremony, like those associated with the opening of parliament or the crowning of a monarch, was performed with military precision. Any tendency towards spontaneity or impatience with poncing about in fancy gear doffing your cap and kneeling in supplication  – all that got  sucked out of the graduand by the surrounding atmosphere and respect for traditional structures. I’m told the House of Commons is similarly designed to cow any new MP with a tendency to be rebellious.
It’s called soft power, and the English handle it with an aplomb that not only tells you the tradition was and is good, but you’d better respect it if you know what’s good for you. No wonder they created an empire on which the sun never set. And it makes you wonder why the Catholic Church, after centuries of the Latin Mass, opted for the vernacular. Who needs to understand?
PS Here’s a video of before and after the graduation ceremony.
http://www.youtube.com/watch?v=DdtxhT5n1fg

View all posts by Jude Collins →
Newspapers and painting the historical picture.
We only think there’s nobody like us

4 Responses to You don’t understand – so what?