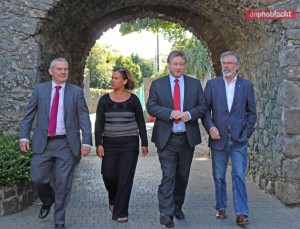 I was on Radio Ulster/Raidio Uladh’s Talkback yesterday with Basil McCrea. I’ve always found McCrea an interesting person, if for no other reason that he appeared genuine and friendly, regardless of who he was speaking to. More of that later. The topic under discussion was James McClean’s rejection of the tag “Northern Irish”, making it clear that he was Irish, full stop.

Me too. It’s not, as one caller informed me, that I couldn’t say “I am from Northern Ireland”. I could say it all day if I thought it was worthwhile. But I don’t use the term because in the elaborate code system that we employ here, “Northern Ireland” tends to suggest that you are content within the state which was created nearly a hundred years ago at the point of a gun – in fact tens of thousands of guns. If someone wants to tell me I’m an Ulsterman, I’m happy to accept that too, providing the person makes clear that Ulster is nine counties. If they don’t, then I was born in the province-less county of Donegal.

I said this discussion sprang from James McClean and his sense of identity. In fact it springs originally from the fact that so many people ticked the ‘Northern Irish’ box in the last census, which was greedily seized on as proof positive that a lot of Catholics/Nationalists here were content to remain within the union with Britain. That’s a comforting thought for unionists; it would be interesting to see that thought tested in a referendum on the constitution. One point that William Crawley made (he has to be the prototype of active chairmen) was that to be constantly discussing one’s identity is probably an indicator that one is insecure as to what one is. I think there’s a lot of truth in that. And guess which section of our society is forever banging on about its identity? Right again, Virginia.

But to come back to Basil McCrea. After the on-air discussion, I asked him how it was that the most promising form of unionism – NI21 – was strangled at birth. Let’s say he didn’t reject the notion of a conspiracy by those who had most to lose by the creation of a truly progressive unionist party. He also assured me that there’d be information coming through in the coming months – well before the summer – which would reveal what had happened at the unhappy birth of the party and that it would exonerate him completely.

18 Responses to Identity and the late NI21 party