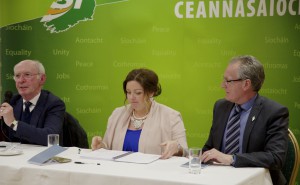 I chaired a meeting in Belfast’s Lansdowne Hotel last night. It was organised by Sinn Féin and clearly intended to boost the attempt by Gerry Kelly to take the North Belfast seat held by Nigel Dodds.  Besides Gerry Kelly, the other two panellists were Deirdre Hargey,  leader of the Sinn Féin group in Belfast City Council, and Carál Ní Chuilín the DCAL Minister at Stormont.

It was an interesting debate and one that raised a number of issues besides the central one of the North Belfast constituency election. At one point, instead of asking a question, a  burly man detached himself from the audience and headed for the table behind which we were seated. I immediately began an Act of Contrition but it turned out his wrath was directed at Carál and Gerry: he’d written to them on some matter which he refused to divulge publicly and hadn’t received a response. He added that he’d been similarly rebuffed by representatives of all the other political parties, including the DUP. Carál Ní Chuilín apologised for the response failure and assured the man she’d be happy to discuss it with him at the end of the event. When I left they were still talking in what seemed a civilised way.

That was the entertaining bit. The serious bits were such matters as the Ashers Cake controversy and the North Belfast Westminster election. When I asked Gerry Kelly if he thought the Ashers people and the several thousand who’d come to the Waterfront Hall a few nights ago were sincere or cynically using the incident as a way to block equality legislation, he conceded that many of the people involved were probably sincere. That, he added, didn’t mean they were right. Unionism has always fought against equality legislation, for the good reason that any righting of the balance would mean unionists were no longer in the top-dog position.  They were using the Ashers Cake case as a bulwark against the drive towards a fairer society.

Other matters were touched on, including the need for Acht na Gaeilge/an Irish Language Act . That on its own could have occupied the entire evening’s discussion. For me, though, the matter of the North Belfast election was the most interesting.

All three panellists, not surprisingly, rejected SDLP candidate Alban Maginness’s claim that a pact with Sinn Féin would be a sectarian pact. Not a particularly difficult conclusion to arrive at, since the pact/no pact has obviously nothing to do  with religious faith and everything to do with politics. In the end, it’s a question of who can or can’t be elected in North Belfast.  One thing is certain: Alban Maginness can’t. Which means his candidature exists to minimise the chances of the seat going to Sinn Féin.

And there is a  possibility that will happen. The figures over the years show the gap between Nigel Dodds and Gerry Kelly narrowing inexorably. Kelly believes things have now reached the tipping point: the question is, will voters who broadly support Sinn Féin’s policies and who see little to nothing from the years during which Dodds has warmed the seat – will they come out to vote? If they do, it’ll mean clambering over three obstacles: Nigel Dodds, Alban Maginness, and a drop across Western Europe and the US in the number of people who bother to vote.

The third of these is the one that makes me punch the wall. Voting or not voting is a bit like being ambitious or not ambitious in your career. You can reject ambition as a power-hungry delusion and feel good about yourself; but if you do, you must be prepared to face a future where you’re bossed about by some nincompoop with the brains of a canary.   In short, if you sit on your hands, you put yourself at the mercy of what could be the merciless. Likewise with voting. By saying “Sure they’re all the same!”  and staying at home, you pass control of the election outcome to other people. And as  the recent air disaster showed in a terrible way, bad things can happen when you cede control  to others.

At the end I asked the audience for a show of hands in favour of compulsory voting: the great majority of those present were in favour. Me too. We don’t get the politicians we deserve. We get the politicians others choose for us while we sit on our lazy arses  watching Eastenders.

23 Responses to Last night at the Lansdowne