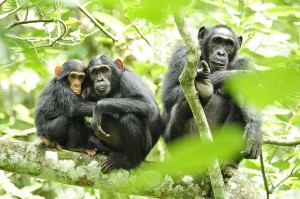 My little two -year old  golden granddaughter’s current  fixation is on all things “monkey” ….or I should say “mOnkeeey” , which is how she says it .She has two furry toys  “Big Monkey” and “Little Monkey2”, both of which have to be attended to ; wheeled about , brought to bed , picnicked with and sat up to share multiple viewings of “Postman Pat ” and “In The Night Garden”. They are truly part of her “family”.Yes…it has been an exhausting , but lovely couple of days……

With this in mind, I am currently reading with some degree of fascination the chimpanzee case going through the courts in the USA.Within weeks ,arguments will be heard in the New York State Supreme Court as to whether or not two research chimpanzee named Hercules and Leo should be considered sentient persons and not property .The result would define whether or not they would be entitled to freedom under the law.

Okay, I know some of you will be doing a double-take when you read this and declare…”Huh?Are you for real?” Well, there you have it .it is is happening and it is real alright. Now of course “Hercules” and “Leo” are not their real names.These are labels that humans have bestowed on these chimpanzees sometime in the past, but for the sake of clarity , those are the monikers that the court will know them by.In chimpanzee communication , they may know each other by something entirely different , if at all. Justice of the Peace, Barbara Jaffe has just now signed  a court order which asks Stony Brook University to prove why it should have the authority to hold Hercules and Leo in “captivity”.This was a response to an ongoing campaign and petition from the Nonhuman Rights Project.Think about that in relation to the ongoing row about equality that we are currently having across the Atlantic Ocean in Norneverland .A Health Minister has just resigned because his religious views can’t allow him to condone equality at all…..and that’s only in relation to his fellow human -beings.

Attorney Steven Wise for the Nonhuman Rights Project has been filing lawsuits on behalf of “imprisoned ” and unfree chimpanzees in New York , for over a year now. This isn’tquite Planet of the Apes science -fiction , but it’s certainly ticking a few of those  same boxes. It is quite a revolutionary move in many respects.A press release from the group has recognised  the judge’s action as as the first time chimpanzees have been recognised as legal persons because the order included a writ of habeas corpus.Habeas Corpus is designed to protect prisoners from unlawful detention. Judge Jaffe  subsequently struck out the words “writ of habeas corpus”, thus amending it. That act actually doesn’t really change the direction of the order which basically means to show “just cause” for this unlawful detention. What  this is ultimately  stating is that the two chimpanzees are actually two separate persons , with personalities and rights .

Of course these advocates don’t want the chimpanzees to be abandoned to the hard streets of Manhatten to gambol and frolic through the cacophany of the cities and parklands , spreading havoc in their untutored wake. They would rather that they be moved to a Save the Chimps Sanctuary in Fort Pierce in Florida. The repercussions  of recognising “animals” as people has many repercussions for homo-sapiens society, of course; just as the legalising of homo-sexuality throughout the land a few years ago  has confused the minds of many .I am reminded of the great  Phil Silvers sketch in his “Sgt Bilko “show where he inducted a chimpanzee into the army in Fort Baxter.He hadn’t many problems because the chimp was possibly brighter than many of the other recruits.

The  Nonhuman Rights Project has not  yet been successful  in convincing the courts that Leo and Hercules and yet another chimpanzee called Tommy should have the same entitlement to rights as  various ethnic nationalities and groups such as gays, but there will be some far-reaching repercussions  practically and philosophically  in recognising our cousins , the chimpanzees,  as “people”.If that was the case , they would  legally  have rights without the understanding that those rights carry some responsibilities…much as children have to reach “the age of reason”.

The creatures would need to be able to interpret and abide by the laws of the land. Given that some of our human citizens  in Norneverland  have problems interpreting  morality and upholding the laws of the land in relation to their fellow human -beings , never mind  other creatures reliant on their care, I can’t imagine this case going too far but I await the conclusion to the story with some interest when it all goes back to court towards the end of May. In the meantime , I’m wondering what kind of new Health Minister  will soon  be appointed  and placed in charge of the minions .

View all posts by Jude Collins →
So tell me, Nigel…
So who’s going to win?

2 Responses to CHIMPS IN COURT by Harry McAvinchey