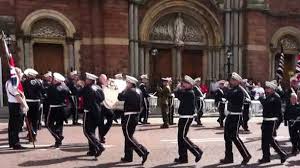 I never come off a radio or TV programme without feeling yet again that the broadcasting media allow you to scratch the surface of a topic only. I had that old familiar feeling yesterday and today, after participating in two discussions.

Yesterday was the Ulster Museum   (no, Virginia, the question of  it catering to nine counties or six wasn’t raised). Actually  the topic of discussion wasn’t the museum itself but rather what the book/souvenir shop sold . Apparently the DUP’s Brenda Hale visited it with her daughter and was “disappointed” because it had a bias in its book selection towards “the nationalist and republican traditions”. Not enough stuff about Ulster-Scots, the Orange Order and the First World War.  Talkback’s presenter William Crawley visited the shop earlier yesterday and it seemed they did have a fair amount of stuff that reflected the unionist tradition.

My central point was that the book/souvenir shop should, in its books section, reflect both republican and unionist traditions. Talkback very kindly tweeted this, but unfortunately forgot to add what I said immediately after, which was that we didn’t want to make the historical mistakes that were made with Belfast City Hall and Stormont, in which the nationalist/republican tradition is represented so marginally, it’s scarcely visible. I could have added that for fifty years and more, one major aspect of nationalist culture, the GAA, didn’t exist as far as the building in which we were sat was concerned. You just didn’t go to the BBC if it was Gaelic football results you were after, let alone coverage of games. And it goes on: the newspaper which gave Brenda Hale’s complaint front-page coverage was the News Letter. In the same edition’s sports pages you’ll find extensive coverage of soccer, cricket, rugby, golf, boxing, motor-cycling and archery,  but no mention of Gaelic football, the biggest participant sport in the state. Although to be fair, they did mention in their News section the funeral of  a  GAA player who’d died in a car crash. So for Brenda to complain about imbalance in the museum’s book/gift shop is a bit rich, in a city where  the streets (Royal Avenue, Windsor Avenue, Prince Charles Way) the buildings (Windsor House, King’s Hall) and even  bridges and university (Queen’s University, Queen’s Bridge) cry out “We are loyal subjects!”.  And isn’t there something a bit weird that your focus in a museum is on the book/gift shop and not the museum displays themselves?

Of course Brenda’ s complaint fits into a pattern of similar complaints: unionists are being done down at every turn.  This morning I was on the Nolan radio show (shut up, Virginia), discussing the judgement handed down in court to the Young Conway Volunteers flute band, who circled in front of a Catholic church playing ‘The Famine Song’. This was immediately linked to the shouted remarks of the band The Druids, who at last year’s Ardoyne Fleadh told the British army and their Orange brethren to fuck off back to England.  Suggestions were made that the flute band’s song was an innocent ‘Sloop John B’ and not meant to be provocative,  while at the same time pointing to  the stupid, uninformed, sectarian views of the Druids and complaining because they hadn’t been prosecuted. Yousins are getting off all the time and usins are having our culture stripped away. When I suggested that the 2- 3000 marches by  bands each year belonged to an anti-Catholic organisation called the Orange Order, I was told I was a bigot.

Unionism is not having its symbolism and heritage stripped away each day. It is still more than visible throughout the north, on gable walls, in Stormont, in Belfast City Hall, in the streets and buildings and bridges. It’s just that we’re edging towards a society that aims at equality for all, and some people find that very hard to bear.

24 Responses to Inching towards equality