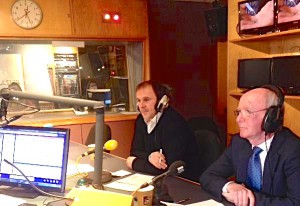 I was on BBC Raidio Uladh/Radio Ulster’s Talkback yesterday discussing the latest DUP kite. No, sorry, that should have been ‘initiative’. As Liam Clarke pointed out in the front-page story of the Belfast Telegraph, the DUP plans to press for, among other things, legislation that would “protect the right to march” and limit the ability of residents’ groups to object.

Under a number of headings this makes as much sense as walking around with a paper bag over your head reciting ‘When I have fears that I may cease to be’. What everybody knows or should know is that where there’s a difference of view between marchers and residents, the only answer will come through an agreement that treats both sides with respect. It would appear the DUP have given up on that. What they want is more muscle in the ranks of the marchers and a gag in the mouth of the residents. Can you think of a better recipe for disaster?

There’s one of two ways to interpret this latest DUP move. The first is that they sincerely believe that this enhancement of the right to march (anywhere?) is what justice demands, in which case they’ve an odd idea of justice. The second is that they know full well that this call for legislation that’ll sweep the road clear for the happy marchers won’t get anywhere at Westminster, but they believe that their demands for the croppies to lie down or at least step aside will be met with enthusiasm by a substantial segment of the electorate. This will out-flank the PUP and the TUV and garner them more votes  on 7 May. It’s hard to know whether the arrogance of the first interpretation is worse than the cynicism of the second.

During the Talkback programme, the number of people who called in and said the DUP was disaster-bound was surprising and encouraging in equal measure. A number of them – and Winston Irvine – said that they were convinced the DUP had miscalculated and that their posturing as superprod defenders of all things marching would not find an echo in the bosom of unionist voters.

Me, I’m afraid I’m a bit more cynical. Just as the media can encourage the public to think in given ways about any situation, so I think the DUP with its proposal is encouraging and affirming those who want to boot the residents out of the way and march where and when they want.

Not all the phone calls to Talkback were positive. At least one caller insisted that the residents’ groups were being manipulated and intimidated by ‘dissident’ republicans who were intent on playing the role of super-taig in this matter. In other words, the problem lay with the residents, not the marchers. It would appear the DUP agree.

Looming behind all this, of course, is the whole marching tradition. When we speak of the Orange Order we’re talking about an anti-Catholic, reactionary force in Irish politics, founded on the death of some thirty Catholics, opposed to Catholic Emancipation in 1829 and the Great Reform Act in 1832, the source, as Andy Boyd’s book Holy War in Belfast catalogues, of repeated scenes of public disorder and even death throughout the nineteenth and twentieth centuries, right up to the Garvaghy Road and Camp Twaddell. That’s not to say that all Orangemen are bigots. Many – even most – simply want a day of crack and excitement to break up the summer. But the organisation that is giving them this is one that has divided the Irish people for centuries and continues to bring out the worst in  a lot of people. As for the need to have 2,000+ marches a year to celebrate the victory at the Boyne and to have enhanced legislation to see those marches happen: the Orange state may have been dismantled but the outer trappings are alive and pounding our highways. And now the DUP has indicated they need more room on those highway, step aside, fenian,  if you don’t want trampled on.

Some people seem determined to nip reconciliation and reasonableness in the bud.

‘The Ballad of Willie Nelson 1798’ by Randall Stephen Hall
Being at Westminster, making a difference?