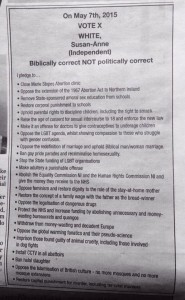 I just thought you’d all need to read this .There was some discussion about “Mrs White” some time ago  and I must admit I had problems initially believing that she was, in reality , no more than a comical construct cobbled together  by a team of writers with the idea of selling the creation to a television company to make a comedy series. I’d heard her  emotings on local radio and assumed that someone was doing a “Mrs Brown’s Boys” satirical sequence, or the like .

But no. I  admit that I was wrong .Mrs White , a latter-day , much more vigorous reincarnation of that 1960’s icon Mrs Whitehouse , scourge of all things liberal , is actually and near -unbelievably , a real -life living and breathing, blood and bone human being .

Out there in the world there is a woman , again standing for election,  in the Fermanagh and Omagh district in Norneverland, with some  really quite extraordinary views.She has issued an electioneering list of some twenty- odd pledges.

That is “odd” in both senses of the word. Some of her views would rival anything the Nazis could come up with. The current list of pledges is as follows, as transcribed from her  leaflet and every one of them could fuel a debate for the next year or so..

They read , under the heading….

2.Oppose the extension of the 1967 Abortion Act of Northern Ireland

5.Uphold parental rights to discipline children, including the right to smack

6.Raise the age of consent for sexual intercourse to 18 and enforce the new law

7.Make it an offence to to give contraceptives to underage children

8.Oppose the LGBT agenda, whilst showing compassion to those who struggle with gender confusion.

9.Oppose the redefinition of marriage and uphold Biblical man/woman marriage.

14.Oppose feminism and restore dignity to the role of the -stay-at -home-mother.

15.Restore the concept of the family wage with the father as bread-winner.

16.Oppose the legislation of dangerous drugs.

17.Protect the NHS and increase funding by abolishing unecessary and moneywasting bureaucrats and quangos.

18.Withdraw from money-wasting and decadent Europe.

19.Oppose the global warming fanatics and their pseudo science.

20.Imprison those found guilty of animal cruelty, including those involved in dog fights.

21.Install CCTV in all abbatoirs

It would be easier for me to pick out the few  pledges  from here that I think might fly for me  personally ,of course. My list would be very short; mostly to do with issues of animal cruelty .I think those are the ones I’d agree on and I would have no real argument with .As for the remainder of the list…well it strikes me as  a  timely reminder as to how far we have come as a society and the fears that this progression has engendered.Mrs White appears to be a person living in some fear of progress and her ability to deal with a more complicated world.In that she is something of a symbol for all that is wrong in certain quarters of Norneverland.Is it possible that anyone could be so out of step with the 21st century as this proposed politician ?If you were thinking that the DUP or the TUV were the rump of the unenlightened, here we have  a maximum strength version …as if  from the shores of their wildest members’ dreams.She is an Independent candidate, of course.

Mrs White’s vision of proposed future will most probably be lost in the morass of the election , along with her deposit ,but I’m left thinking how this would -be- politician squares her pledges 14 and 15  which are as follows….

“14.Oppose feminism and restore dignity to the role of the -stay-at -home-mother.

15.Restore the concept of the family wage with the father as bread-winner.”

..with the idea of attempting to become a full-time , working politician . Mrs. White , for all her enthusiasm , very obviously doesn’t do joined -up thinking.