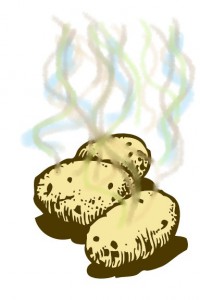 Jim Wells and the DUP have , once again , allowed their paranoia to climb out of that leery old sack of rotting potatoes.As Health Minister , he follows in the grand tradition of his former minister Edwin Poots  in waving that anti-gay flag. With Mr Poots  it was the plague of “gay blood” , which was perfectly fine for the UK but he didn’t want any of this genetically infected gore introduced in good old Christian” Norneverland. Gerry Adams may have had his Trojan Horse moment  but this is the kind of thing he was talking about  and his statement was made conversationally among friends and not in front of the public. He spoke of introducing an equality agenda by stealth…..because we are dealing with people like Jim Wells. There it is.

Jim Wells  soiled himself and emitted an almighty mental fart right out there at a public meeting and claimed that child-abuse was the end product of same -sex marriages .In other words he vilified an entire community of homosexual  people. His mind opened out to declare that basically homosexual people were immoral to the point of being simply sex-fiends. He really let that paranoid cat out of the bag. Well …at least he is honest .Now we have it right there in the open. It’s not as if we didn’t know already that the DUP were anti-gay.We already know  that they have a flat-earth belief system and homophobia is only one little facet of that.The DUP  in election -mode are keeping quiet about this eruption of spleen but already the ranting , evangelical “Christians” are crowding onto the airwaves to defend  their stance .They basically want to reduce Norneverland to a little anti-Europe enclosed sect of anti-Darwinists.They’d all be much happier wandering around in the desert wearing Jesus sandals.

Jim Wells is a big player in a political party that sees itself as “Kingmakers” in a potentially hung parliament within about two weeks. How any major political party, either Conservative or Labour, could fly their colours in company like this, beggars belief.He represents a party locked into a mindset completely out of step with the modern world .Someone would need to take him into a quiet room, talk to him , clean him up  and  pull his trousers back up. It is time for him to grow up.

View all posts by Jude Collins →
Jim Wells: it takes a worried man
Gallipoli and all that