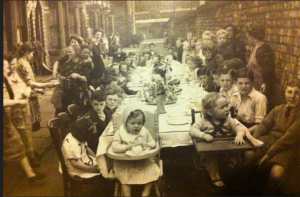 Where else would you get it? I was on Talkback today, in a discussion about the Nazi flag that was put up in a West Belfast school. A pupil came on and explained it was an end-of-year prank, nothing sinister or Nazi-supporting, which rang pretty true. But it was another caller who remembered  VE Day in the Belfast area who I found most revealing.

He remembered fondly how they’d celebrated that day, put up Union flags everywhere, some bunting made of bits of underwear, ha ha, a lady’s nylons involved, ha ha, where did she get them, ha ha, and then a certain organisation ho ho that celebrates a particular day in July, hee hee, burning tyres and the like but also ha ha they had an effigy of a certain ha ha Italian gentleman so they kindly lent us it and we painted a Hitler moustache on it, ha ha, and it went on the celebratory bonfire. Ah happy days…

That’s not verbatim, of course, but you get the drift. It was all so good-natured and the conversation soon moved on. Only then on the way home I began to think about it. They celebrated because as British people had defeated Hitler. Fair enough. Union flags and bunting, fair enough. But the bit about the good people who lent them their effigy? Was that a bit of a laugh too – planning to burn the effigy of a ‘certain Italian gentleman’.  He might have been the religious leader of Roman Catholics  – but there was no question of them being offended.  It wasn’t as if the VE celebrators had planned to burn the effigy of the Chief Rabbi. Or the leader of Islam. Or the head of the Church of England. No, it was a ‘certain Italian gentleman’. A religious gentleman. But burning said gentleman was part of the tradition so who could get offended at that. Just a laugh, really. Ho ho.

View all posts by Jude Collins →
Three election thoughts for the day that’s in it…
“Noooooooo!!!”