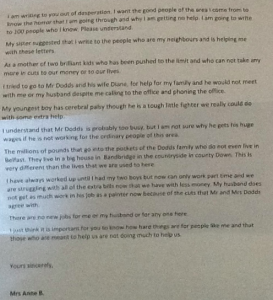 How do you react to anonymous letters? Myself, I usually read them and then post them on this site…What do  you mean, you didn’t notice that virtually all the posters on this site do so anonymously? Anyway, I know a verbal balaclava is the conventional headgear in discussion sites such as this so it doesn’t bother me that much.

But someone I know sent me a copy of the letter above a couple of days before polling. It’s interesting. First it’s anonymous, secondly it’s an appeal from an apparently helpless person, and finally it appears to be targeting Nigel Dodds. And note the bit about the little boy with cerebral palsy. Touching.

But why was it sent, not just to the person who passed it on to me, but to lots of other people as well? Well, looking for help, is your first reaction. But what help could anyone give someone who doesn’t leave their name and address? And who would be likely to send a letter which appears to accuse Nigel Dodds of heartlessness? What’s that, Virginia? The Shinners? After all, the electoral contest was essentially between Dodds and Sinn Féin’s Gerry Kelly. So if they sent it, you can see what an unscrupulous bunch they are. A fact no doubt noted by those who received the letter.

But hold.  Do you think Sinn Féin are stupid? Do you think they’d sent out a letter like this, no name, no address, with a sort of Disneyland/Hollywood soaring-orchestral-strings appeal from a helpless mother with a gallant little lad suffering from cerebral palsy? A letter that shouts “Fake!” with every sentence?  I think not. At first glance this seems an anti-Dodds letter, hence the Sinn Féin as sender suggestion. But two seconds of thought should show you that it’s really an anti-Sinn Féin letter, since it appears to show them up to dirty tricks.

So who or what party would want to show Sinn Féin as crude liars, intent on smearing their political opponent? Let me think….

10 Responses to A touching letter with ‘Fake!’ written all over it